Talented chef at the Sedgewick Hotel

Poison the critic before he gets a bad review (succeeded).
Kill the Ghostbusters (failed).

Chef Sargossa (also known as Chef DeForrest or Master Chef LaBlog) was a supporting antagonist in Ghostbusters: The Game.

Chef DeForrest was a talented chief at the Sedgewick Hotel in New York City and on the verge of becoming world-famous. The night the restaurant critic came to his restaurant, however, things went poorly. In order to avoid a bad review, the intensely paranoid Chef poisoned the critic's dessert course. He hid the poison poorly, though, and it accidentally found its way into the staff's dinner the following evening. The entire staff, including Chef DeForrest himself, died horrible and painful deaths.

The Ghostbusters are sent to the Sedgewick Hotel to investigate a possible Mandala node. Upon arriving at they find that the power is out and have to go through the kitchen to restore the power. After turning it on the team go back through the kitchen but are ambushed by Chef DeForrest and his chefs. He is captured by the new recruit along with his minions. 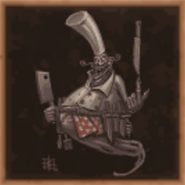 Retrieved from "https://villains.fandom.com/wiki/Chef_Ghost?oldid=3600059"
Community content is available under CC-BY-SA unless otherwise noted.