Helping up with difficult challenges

He is an illegitimate cook who is Chris McLean's personal sidekick and right-hand intern, as well as his best friend who shares his habit of tormenting (even accidentally murdering via neglect for their well-being) for fun. He is also co-host of Total Drama as Chris often lefts Chef host in his nasty challenges whenever he is absent. Since then, Chef has become one of the most beloved yet hated characters of the series.

The character was voiced by Clé Bennett, who also played Harris Prime in Heroes Reborn. In Total DramaRama, he was voiced Deven Mack.

Chef Hatchet is the psychotic sidekick of Total Drama host Chris McLean. He provides the meals for the contestants, disgusting slop which has been slammed by all but a few competitors, but even they have complained about it at one point or another. However, some episodes have suggested that Chef actually does have exceptional kitchen skills. He will take over as primary host on rare occasions in which Chris is absent (or he tells him to). Given that both are equally unconcerned about the teenagers' well-being, it is hardly a far cry from the normal routine. Chef is bigger, louder, and much more confrontational and intimidating than his counterpart, who prefers a different outlet of striking fear into the contestants. However, Chef does show occasionally an ounce of care for some of the competitors, and is considerably less sadistic than Chris since he has been shown to sympathize with some of the contestants. This was most evident in the Total Drama All-Stars series finale, where he shook his head at Chris’ sadistic pleasure at presenting the course to the contestants, commenting that people were going to die in disgust, although he still retains the same apathy and sadistic pleasure Chris has for the contestants afterwards, just not completely. He is frequently seen wearing ridiculous costumes, usually women's outfits, which garner teasing from everybody present.

Chef has low tolerance of Owen for his stupidity and weird eating habits. When Owen made fun of his cooking, Chef takes it offensively when calling Owen as a fat boy. But nonetheless, He is shown to be thankful when Owen is the only one who appreciated his cooking despite they are disgusting.

Chef is sadistic when he tortures the competitors. He is also pleasured when Chris assigned him to whip Duncan with Chef's Olympic towel where he talking instead of singing ever since Duncan quit the show. When Chris let him host while in his absences, Chef declare he'll bring the pain.

Although he and Chris are friends, they have had more than their share of negative interactions throughout the series. Chris's selfishness and neglect of the competitors will sometimes be duplicated in his treatment of Chef. Chef is not at all hesitant to call the other out and, in some instances, he has threatened or come close to leaving the show because of it. Chris is always extremely against this idea. Chef is multi-talented, having been seen doing many things skillfully while Chris introduces challenges. He has claimed to have fought in a war, though it is unknown which. When learning Chris used to be in a boyband known as Fame Town, Chef didn't hesitate of laughing at Chris. Despite of arguments, Chef cares for Chris when he was flung by Scott's trap and later captured by the completely feral Ezekiel.

Chef has shown to be honorable at times, such as when he had Harold to go to the infirmary due to him vomiting too much mud, sprayed Bridgette due to her having skunks' stink, and let Owen go to the bathroom due to him having eaten fake food made of foam court, silicone, wax and sawdust. 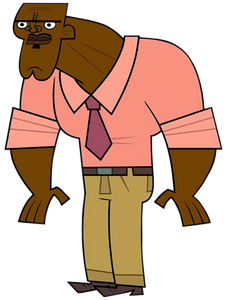 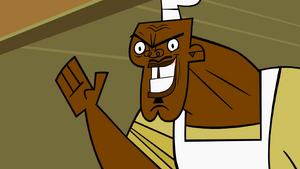