Cook the rare animals, including Turbo

Homicidal Chef
Chef Lombardo is a major antagonist from the TV series, Turbo: F.A.S.T., who serves as the main antagonist in the segment, The Escargot Affair.

Turbo was invited to join the party, but once he went in, he got placed in a cage. There are other caged animals, which includes an orangutan, a vulture, a rabbit and an echidna. All of them are rare animals that will be cooked by Chef Lombardo. Later, the animals escaped and fought Chef Lombardo and he got defeated.

He appeared having a chef hat covering his entire head as a mask, since there are eye holes. He also appeared shirtless and he also has a sash with many knives, since he uses those for cooking.

He is a very sadistic type to animals and he enjoys killing them with knives in order to cook them. 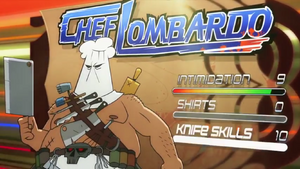