Prevent Linguini from discovering that he is the son of Gusteau in order to maintain his role as the chef of Gusteau's restaurant (failed).
Exploit Auguste Gusteau's image to sell frozen food products (failed).
Expose and shut down Gusteau's for a rat infestation as revenge (succeeded).
Capture Remy, and use him to create a new line of frozen foods (failed and abandoned).

He is the former sous-chef under the restaurant Gusteau's, as well as the former employer of Linguini and the partner in-crime to Anton Ego. When it becomes apparent that Linguini is the rightful heir in inheriting the restaurant, Skinner secretly schemes to maintain ownership of the restaurant and later had planned to release a new line of frozen foods for his own personal profit. He is Remy's arch-nemesis.

He was voiced by the late Ian Holm, who also played Ash in Alien, and Jack the Ripper in From Hell.

Chef Skinner is shown to be very cunning, avaricious, deceitful, unrelenting and wrathful. When he discovers Remy is the brains behind Linguini's tasty recipes, he decides to capture Remy and force him to create his frozen foods for him. Skinner is also bent on claiming the restaurant as his when Auguste Gusteau had no heir.

Despite his nature, Skinner takes his job as a chef very seriously. For example, despite Linguini disobeying him, he gave him a chance to prove his worth and kept him on after he thought that his soup was excellent. He further displays this by becoming upset with Linguini for possibly serving a substandard meal; proving that he is somewhat passionate about his job despite selling out with frozen food.

Also, when marketing his frozen food, he made sure that Gusteau looked like he did in real life, even telling the person designing it to show some respect.

Skinner was sous-chef under Gusteau but became the head chef after his death. In Gusteau's will, it was stated that Skinner would inherit Gusteau's business interests if no heir appeared within two years after the latter's death. Skinner did not hold Gusteau's ideals in the highest regard and was more interested in personal profit from his line of Chef Gusteau Frozen Foods. This line comprised of several different foreign foods like chicken, haggis, burritos, ribs, and corn dogs to appease oversea markets, with Gusteau as its image to woo buyers.

Skinner later hires Alfredo Linguini to work at the restaurant as the plongeur (garbage boy) when he learns that Linguini's mother Renata, with whom Gusteau was close, requested that Linguini get the job before her recent death. He is shocked when Linguini makes a soup that night that impresses a food critic that just happened to be at the restaurant, although it was Remy who cooked it in secret. Suspicious, Skinner reluctantly agrees not to fire Linguini and forces him to make the soup again, believing that it is all a fluke.

After Linguini and Remy team up, they successfully recreate the soup and impress Skinner. However, they become rivals when Skinner learns that Linguini is Gusteau's biological son, and is determined to keep Linguini from discovering this fact. He becomes even more determined when he sees Linguini making contact with Remy on numerous occasions, suspecting that Linguini is scheming something bad in the restaurant. Skinner deliberately attempts to sabotage Linguini's success by tricking him into making a rancid recipe, although this backfires when Remy revives the recipe, much to the praise of the diners and patrons. Skinner attempts to get Linguini heavily drunken on wine in order to confirm his suspicions about Remy, but this fails as well.

He loses the restaurant to Linguini when it comes out that Linguini is the son of Gusteau, as Remy discovered the paternity test results that Skinner tried to steal and gave it to Linguini so that he may assume his rightful place as owner. Linguini later cancels the frozen food line altogether, as it was smearing Gusteau's image.

Skinner spies on Linguini and eventually discovers that Remy is the real cook. In order to get revenge on both of them, he captures Remy and intends on forcing him to create a new line of frozen foods, while attending the restaurant in disguise to see Linguini fail miserably and endure another scathing review from the famed critic Anton Ego. Fortunately, Remy escapes and had his swarm of rats to help Linguini serve the dishes without attracting any attention from the customers.

To Skinner's great amusement, Linguini served him and Ego a simple dish of ratatouille but is surprised when Ego likes it. After Skinner tries his dish and finds its taste irresistible as well, he races to the kitchen to find that Remy and his colony of rats cooked the dish. The rats are then forced to bind him with the ropes and gags him with duct tape. He is then thrown in the refrigerator along with the health inspector who has been bound and gagged as well.

Despite the restaurant getting a high-star review from Ego for Remy's delicious recipe, the rats were forced to let Skinner and the health inspector loose, since they cannot keep them cooped up forever. This allows Skinner to report the rat infestation to the health department, causing the restaurant to be closed and Ego losing his job and his credibility as a critic. Despite the restaurant being closed down, Linguini and Remy manage to open a new successful bistro called La Ratatouille to serve for both humans and rats alike with the help from Colette and Ego (who now works as a business investor), which means Skinner finally leaves him alone. 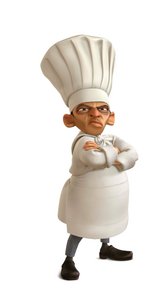 Skinner in a photograph with the late Chef Gusteau.

Skinner chasing Remy on a motorcycle.

Skinner bound and gagged along with the health inspector. 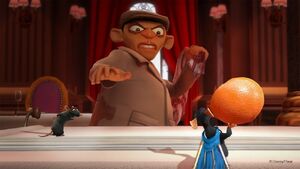