Evil Creation
Chelsea is a one-time villain from the 2016 reboot of the Cartoon Network original series, The Powerpuff Girls, only appearing in the episode "Odd Bubbles Out". She is a robot girl created by Mojo Jojo to pose as a human to be friends with Donny so that he could drive him and Bubbles apart.

She was voiced by Kirby Howell-Baptiste.

In the episode "Odd Bubbles Out", The Powerpuff Girls went to Penguin Pete's to see Donny the Unicorn, who is waiting for his new friend, Chelsea. Chelsea comes over to the table with a chocobunny sundae, which she shares with Donny. Chelsea immediately gives off the impression that she's very similar to Bubbles in many ways. Bubbles gets jealous of all the time Donny is spending with Chelsea, as Chelsea takes out a ukelele and sings with Donny about friendship. Later, Donny gives Chelsea the spoon that Bubbles had previously given him to symbolize their friendship, which is the final breaking point for Bubbles. Before Bubbles can freak out, The Powerpuff Girls get a distress call and are forced to leave.

After watching Space Towtruck on ice with Chelsea, Donny returns home to The Utonium House, where Bubbles is angrily waiting for him. Bubbles yells and gets mad at him, driving a wedge between the two and leading Donny to leave the house and abandon Bubbles, so that he can live in Chelsea's volcano with her. This makes Bubbles so sad that she cries for two days. When Bubbles mentions that Chelsea lives in a volcano, Blossom and Buttercup know that Chelsea must have something to do with Mojo Jojo.

The Powerpuff Girls arrive at Mojo's lair, where sure enough, Donny has been kidnapped and his now being harvested for magic to power his death ray. Mojo reveals that Chelsea was a robot he created to trick him. Bubbles sets Donny free and Mojo orders Chelsea to destroy The Powerpuff Girls. Chelsea fires a laser at Donny but Donny uses the spoon to deflect the laser and send it back to Chelsea, blowing her up.

Chelsea is a humanoid robot girl who can easily pass for a typical five-year-old girl. She has tan skin and a bright turquoise-cyan hair that's worn in four puffy pigtails and has a curl on the front. She is a short little girl about the size of The Powerpuff Girls. Like The Powerpuff Girls, Chelsea has a short, stubby body and big eyes with large saturated pupils. Chelsea wears a taffy and lime dress, heart-shaped bubblegum earrings, cerulean jeans, and magenta boots. Underneath her candy-colored exterior, Chelsea has a dark purple robot skeleton.

Chelsea is a seemingly innocent little girl, who is all sunshine and rainbows. Her personality is comparatively similar to the archetype of Bubbles. Her interests include eating chocolate bunny rabbit ice cream, singing songs about friendship, watching Space Towtruck on ice, and most of all, hanging out with her best friend in the whole wide world, Donny the Unicorn. However, she is secretly an evil robot, who's been programmed by Mojo Jojo to lure Donny into his trap so that he may steal his magic. 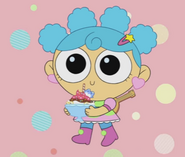 Add a photo to this gallery
Retrieved from "https://villains.fandom.com/wiki/Chelsea_(The_Powerpuff_Girls)?oldid=3673754"
Community content is available under CC-BY-SA unless otherwise noted.