Villains Wiki
Register
Don't have an account?
Sign In
Advertisement
in: Spoilers, Outdated Articles, League of Legends Villains,
and 41 more

The Chem-Barons are a villainous faction in the lore of the multiplayer online battle arena game League of Legends, as well as making an appearance in Arcane. An oligarchical alliance of landlords, factory owners, mobsters, resource owners and businessmen, the Chem-Barons are the de-facto rulers of Zaun with their money and influence, keeping the citizens in line with hired thugs and mercenaries.

Once a united city of science and progress, a series of natural disasters and industrial development led to a split between the prosperous Piltover and the polluted undercities of Zaun. And while the two still function as symbiotic societies, their cultures and power structures became very different, as unchecked black markets and illegal experimentation quickly took hold across the smog-ridden Zaunite streets.

In this wild, lawless place of chemtech and innovation, the most greedy and opportunistic of Zaunite society began vying for power, maneuvering their way through the dark underbelly to become the most powerful crime lords and business owners in the city. Playing things to their own best interests, these oligarchs subjugated the masses and formed an alliance of convenience among themselves, splitting the city into territories that each would control. Because of their cunning, influence, and their use of expensive chemtech augmentations, these oligarchs became known as the Chem-Barons, the unofficial rulers of Zaun who ruled the factories and black market with an iron fist.

As economic inequality grows between the cities of Piltover and Zaun, the Chem-Barons live in relative comfort, abusing their power to keep the poorer Zaunites in line, which in turn convinces the Piltovan government to allow them to stay in power no matter their monstrous methods. To some, the actions of the Chem-Barons prompts extreme and radical action, with gangsters such as Urgot rising up to call for a removal of the barons in favor of pure anarchy. Others, such as Viktor, see the existence of the barons as proof that Zaun must shed their humanity in favor of augmentations, as they will only be able to defeat the barons once human fear and arrogance has been completely eliminated.

While the Chem-Barons maintain their iron grip on power, many Zaunites, such as Ekko, remain hopeful that the future of Zaun is bright, and the barons' influence will someday be defeated by Zaunite invention and ingenuity. 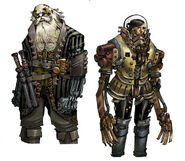 Baron Lenare, who had her head transplanted to a new body.

Baron Takeda, who hates the other barons and works for his self-interest.