Get revenge and extort his former employers for firing him (failed).

Chemistro is a supervillain in Marvel comics and an enemy of Luke Cage and the Avengers, whose name was taken by three different people.

Curtis Carr, the first Chemistro, created a suit and gun that could fire a ray that rearranged matter into a different form. He created the gun for his company, who wanted to mainstream it, but Curtis sought to keep it for himself. He was fired, and, seeking revenge, used the alchemy gun against his former employers. In battle with the hero Luke Cage, Carr accidentally shot his own foot with the gun, turning it to steel. But it was unstable and crumbled to dust, leaving him crippled. He was then arrested and sent to prison.

While he was in prison, he was beaten by his cellmate, Archibald Morton, into finding out how the alchemy gun worked. After Morton left prison, he he attempted to replicate the alchemy gun. However, it exploded in his hand and granted him superhuman powers with the ability to transmute substances via touch. After this, Morton would later become the second Chemistro. Despite Morton's advanced powers, Carr invented a "nullifier" device which enabled Luke Cage to defeat Morton.

Curtis's alchemy gun would eventually be stolen by his younger brother Calvin, and became the third Chemistro. Curtis helped Iron Fist and Luke Cage in defeating Calvin. Curtis would later be hired and work at a division of Stark Enterprises as a research scientist and Director of Research and Development at Stark Prosthetics in Denver, Colorado. There he would make an artificial prosthesis to replace his missing foot. Stark Prosthetics would then get attacked by the Wrecker and the third Chemistro (Calvin), during the events of "Acts of Vengeance", when the Kingpin sent him to attack Iron Man. Curtis aided Iron Man and Jim Rhodes against the Wrecker and Calvin, although Calvin destroyed Curtis' left foot. After that attack, Curtis made another prostheses for his other foot.

The Curtis Carr version appears in the TV show, The Avengers: Earth's Mightiest Heroes. Chemistro was one of the villains in the Vault prison when the mass breakout happened. He was knocked out by Hawkeye while getting his equipment, and later was recruited into the Masters of Evil, where he battled Hawkeye one-on-one.

Chemistro later appeared in Season 2 being pursued by the Enchantress and her Executioner after his loaction had been given to them by fellow Master of Evil the Living Laser. After reaching a dead end Chemistro confronted his persuers managing to melt the Enchantress's hand before she reformed it. In exchange for his life, He gave the Asgardians the location of Arnim Zola, but was betrayed when the Enchantress took his Alchemy Pistol and turned him into solid gold before taking his identity to infiltrate Avenger's Mansion and get close enough to Zemo to kill him.

Iron Man stated he is still alive and Wasp declared her intentions to keep him. 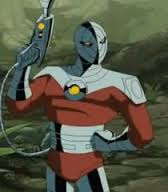 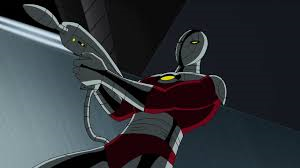 Add a photo to this gallery
Retrieved from "https://villains.fandom.com/wiki/Chemistro?oldid=3316562"
Community content is available under CC-BY-SA unless otherwise noted.