Lord of the Bare Mountain

Spread darkness across the entire universe.

Chernobog is a dark, devil-like deity in Slavic mythology. While not much is known about the deity, it is known that it is a corrupter of human souls, a cursed figure, and the antithesis to the "good" deity Belobog.

While little to nothing is known about the nature of Chernobog or its history, its name translates to "Black God", and it serves as a defiler of purity and a corrupter of good things. Its name itself was considered a curse in many Slavic languages, and was often used in vernacular at the time to describe something exceedingly or unfathomably negative.

In the 12th century Chronica Slavorum by Helmold of Bosau, he documented Slavic religious practices and described them as passing around a libation bowl, which they would pray for fortune to Belobog and cast out the evil of Chernobog into.

Despite the lack of information on Chernobog's nature, many adaptations of the character exist in popular media such as the 2001 English novel American Gods by Neil Gaiman, the television series Heirs of Alexandria, the 1997 video game Blood, the video game series Shin Megami Tensei, and, most notably, his appearance as Chernabog in Walt Disney's 1940 animated classic film Fantasia, where he subsequently appeared in Disney media such as their parks and the Kingdom Hearts video game franchise.

Symbol of Chernobog and only known depiction from the original mythology. 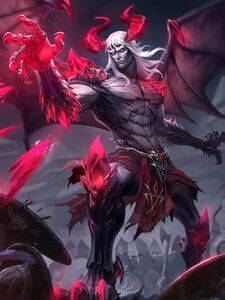 Chernobog as he appears in the video game Smite. 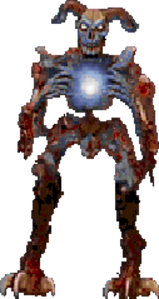 "Tchernobog" as he appears in the video game Blood. 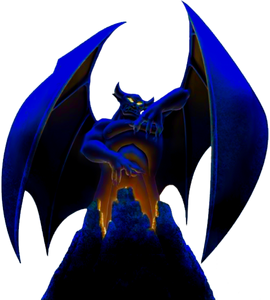 "Chernabog" as he appears in the Disney Universe, with his first appearance being in Fantasia.
Add a photo to this gallery

Retrieved from "https://villains.fandom.com/wiki/Chernobog_(mythology)?oldid=3717510"
Community content is available under CC-BY-SA unless otherwise noted.