Aid Puppetmon in his goals.

Cherrymon (known as Jyureimon in the Japanese version and Treemon in the Finnish version) was a minor villain in the anime series Digimon Adventures 01, as one of Puppetmon's minion (possibly his right-hand Digimon) and the closest Puppetmon had as a friend. Cherrymon also made an appearance in Digmon Adventures 02 and Digimon Frontier. He is also responsible for manipulating Matt into fighting Tai.

Cherrymon is an Ultimate Level Digimon that resembles a cherry tree. He has vines on his head, a large moustache made of leaves, and carries a tree stump as a cane.

Cherrymon was first seen as the closest friend of Puppetmon. He tried and managed to talk to Matt and Gabumon, that Tai was his rival and that he has to destroy him to become better and stronger. Matt knew that Cherrymon was working for Puppetmon, but he nevertheless confronted Tai. After Matt and MetalGarurumon left, Cherrymon informed Puppetmon from his plan, but when he told his master that he must be careful not to underestimate the Digidestined, Puppetmon felt insulted and he destroyed him out of anger, just minutes before WarGreymon and MetalGarurumon clashed.

Later on, during the battle with the Digidestined, Puppetmon remembers Cherrymon’s words. MetalGarurumon fatally wounded Puppetmon. Before he died, he asks Cherrymon what it is that the DigiDestined had that he didn't have Cherrymon's voice said "friends" and then Puppetmon died.

When Digimon appeared in the Real World, a Cherrymon attacked a Christmas Tree at Rockefeller Center. He also caused problems for ExVeemon, Lillymon, Seadramon and Flarerizamon. Then all of a sudden a few DigiDestined with their Digimon, Centarumon, Tortomon, Frigimon came. The four Digimon and the other Digimon were able to knock Cherrymon out and together with the other Digimon were then sent back to the Digital World.

When J.P was in Sakkakumon he encountered a Cherrymon. At first he thought that it was some ordinary tree because he was hungry and he wanted the cherries. Cherrymon then started to attack J.P. J.P. however digivolved to Beetlemon and quickly defeated Cherrymon. 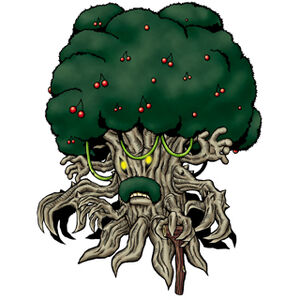 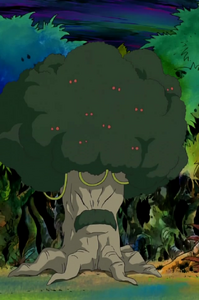