Start a Wiki
Cheryl Dixon was the hidden main antagonist of the 2017 Lifetime film, A Neighbor's Deception (alternately titled, Next Door).

She was played by Isabella Hofmann, who also appeared on NCIS as the evil Evelyn Wallace.

Cheryl Dixon was the sister of psychiatrist Gerald Dixon, and when they were kids, their parents were killed in a house fire; which was revealed to have been intentionally set by Cheryl. After the deaths, Cheryl was institutionalized, but once she turned 18, she was released and put in Gerald's care. Even then, Cheryl continued her murderous acts, as she had been killing those who she felt was a threat to Gerald. One victim was Caroline Rooker, an intern of Gerald's who he had been attempting to engage in a relationship with. Caroline had threatened to take legal action against Gerald, which prompted Cheryl to stalk Caroline and kill her.

In the film, Cheryl introduced herself to their new neighbors, Chloe and Michael Anderson, as Gerald's wife. Both Dixons acted friendly to Chloe, who later visited Gerald as a patient of his. After learning that Caroline's husband, James, had been contacting Chloe regarding his wife's disappearance, Cheryl stalked both of them. Late one night, after James entered his car, the evil Cheryl appeared from the back seat and strangled James to death with a wire. Unaware of what happened to James, Chloe continued digging, thinking that Gerald was the killer.

It was after Chloe met Abigail, who sold the Dixon's new home to them, that Cheryl's villainous identity was revealed, and after Chloe returned to her home that night, she was attacked by the crazed villainess, who attempted to kill her. Cheryl had the wire wrapped around Chloe's neck, but Chloe fought back against her and attempted to escape. Cheryl caught Chloe and knocked her out, and later tied her to a chair. Chloe found herself facing both Dixons, with Gerald claming that he and Cheryl look out for each other. Gerald had reservations about harming Chloe, but Cheryl was insistent on killing her, and after an argument, the villainess placed a plastic bag over Chloe's head and taped it to her; attempting to suffocate her. Michael later arrived home and noticed the home in shambles, and he later found Chloe tied up. Seeing this, Michael cut the bag open with a knife, but later saw Cheryl charging after him. Michael plunged the knife into Cheryl's chest, and as he revealed in the film's end, Cheryl succumbed to the wound. 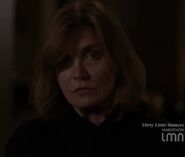 Add a photo to this gallery
Retrieved from "https://villains.fandom.com/wiki/Cheryl_Dixon?oldid=3029093"
Community content is available under CC-BY-SA unless otherwise noted.