Visual art proficiency (as a human)

Drawing (as a human; formerly).

Killing and torturing people (as a Deadite).

Kill anybody she encounters.

Murder of at least two accounts

Cheryl Williams is an antagonist in The Evil Dead. She was Ash's sister and one of the girls who is possessed by Demons. At first, she is supposed to be the main character until she was possessed by The Evil Force.

She is considered as the main antagonist of the first film due to her being the first possessed, having more screentime than the rest of the demon-possessed teens and the fact that she didn't die until the end.

She was portrayed by Ellen Sandweiss.

Cheryl was Ash's sister and his only known close relative that was possessed by the demon. She was the odd girl of the group. She was a Michigan State student and was into art and drawing.

She was the first to notice something wasn't right at the cabin. She tried to get the others to listen but they didn't.

When she went outside at night to investigate noises,

the possessed trees of the forest raped her. She managed to break free and run back to the cabin. She demanded that Ash drove her into town but both found that the bridge has been damaged and turned into the shape of a skeletal hand, forcing them to return to the cabin.

Shortly afterward, she became possessed by a demon. She attacked Ash and others, manage to seriously injure and incapacitate Linda by stabbing her on the side of her foot with a pencil. As she attempted to kill her brother, she was locked in the cellar by Scotty and remained there for the majority of the film, where it was seen that her appearance has worsened by Evil Force that summoned Deadites for help and commanded them to possess others.

After the possessed Linda was killed, Cheryl finally broke out of the cellar. Ash shot her with a single shot shotgun but it didn't kill her. After Ash got back from the cellar, she attacked him through the door and got shot in the face. That still didn't kill her and she attempted to break into the cabin. Ash managed to block the door but Scotty became possessed by a demon as well and attacked Ash.

While Ash was dealing with the demonically possessed Scotty, Cheryl managed to get inside and attacked Ash with a fireplace poker, while the newly dead and possessed Scotty held him by the leg until Ash threw the Necronomicon Ex-Mortis into the fireplace. As the book burned, her possessed body began decomposing at a rapid rate along with Scotty's. She and the demons inside her were seemingly destroyed.

She comes back many years later in the TV series Ash vs Evil Dead in the second season portrayed by the same actress who played her in the first movie when she is resurrected as a Deadite once again by the evil force. Although she is confused at first upon her return to life, her brother Ash, remembering his nightmarish experience with her when she was a deadite 3 decades ago, gives her explicit details on how she was killed. It wasn't long before she 'remembers' what happened to her and reawakens as a full-fledged deadite. As a deadite with enhanced physical attributes, she proves to be quite a formidable opponent for aging Ash.

After wreaking much havoc in the house and killing Ash's friend Chet Kaminsky who suffered unrequited love for Cheryl, Ash shoots her out of the house and asks Cheryl if she remembers playing hide and seek with Ash and locking him in the trunk of a car to which Cheryl grins and laughs to. Ash sends her flying into a car trunk with a boomstick shot. Ash then stands on the lid, pinning Cheryl in with her head sticking out, killing her a second time (this time directly) by sawing off her head. Her last word before her second death was: "Not again..."

Even in death, she was continually violated of her dignity as Baal the Demon transforms into her to mentally torment Ash at the climax of the season 2 of the series when he was forced to travel back in time. After Ash successfully sends Baal back to hell and returns to his own time, Cheryl, now a redeemed ghost, watches her brother being hailed as the savior of her town along with her father and boyfriend before passing onto the afterlife, finally freed from sadistic grasp of the Evil Force that tortured her soul for three decades.

Her death in The Evil Dead has virtually destroyed the bond between her brother Ash and their father, Brock Williams (Brock mistakenly believed Ash killed Cheryl and Ash was angry at Brock for not trusting his own son). Their mutual bitterness was not to be reconciled until 3 decades later, only to have Brock perish at the hands of the Evil Force minutes after the two men made peace with each other.

After Cheryl died, her room is being used by Brandy Barr who is Ash's biological daughter, making Cheryl an aunt. 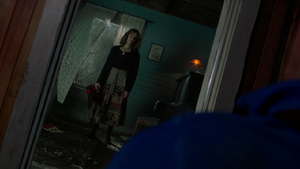 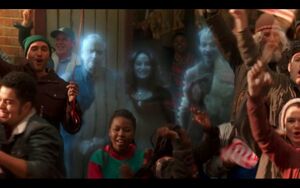 Redeemed ghost of Cheryl Williams with her father and lover, finally freed from Deadites after three decades of torment.