Leader of the Kingsman Agency (formerly)

To aid Valentine in his plot of wiping out a major part of the human race and leading the survivors into a new world under his reign. (failed)

Chester King (also known by his codenames Arthur and Bedivere) is a supporting antagonist in the 2015 action-spy-comedy film Kingsman: The Secret Service.

In The Secret Service, he was the leader of the Kingsman Agency until the events of the film, where it was revealed that he's in league with Richmond Valentine and aids him in his plot to wipe out most of the human race and establish a new world order.

He was portrayed by Michael Caine, who also portrayed Michael Jennings in On Deadly Ground, Dr. Robert Elliott in Dressed to Kill, Dr. Royer-Collard in Quills, and Arthur Tressler in Now You See Me and Now You See Me 2.

Years following the death of fellow agent Lee Urwin, his former partner Harry Hart decides to enlist Lee's son Gary 'Eggsy' Urwin (the protagonist of the series) to the agency, due to Harry's gratitude towards Lee for saving his life during their last mission at the Middle East.

When the Kingsmen interrogate Professor James Arnold following his escape from several kidnappers (led by the assassin Gazelle) a microchip implanted on Arnold's neck is sent a signal and detonates, killing him. The Kingsmen trace the signal to a facility owned by Valentine, who has recently offered everyone in the world his invention: SIM cards that grant free lifetime calling and Internet connections. Meeting up with Valentine, Hart tracks down to a hate group's church, where Valentine triggers the SIM cards to make the attendants go violent, causing a massacre which killed nearly everyone while Hart ends up being shot in the eye by Valentine.

Determined to avenge his mentor, Eggsy returns to the Kingsmen headquarters to convince King to let him get revenge on Valentine. However, just as King offers a brandy to Eggsy, the latter soon notices that King has a scar on his neck in the same location that Arnold had. This made Eggsy realize that King is actually in league with Valentine and that he set off the microchip that killed Arnold in the first place. Eggsy also realized that King has tipped off Hart's location to Valentine and that he has put poison on his brandy glass in an attempt to kill him to cover his tracks.

Outraged by King's treachery against his very own agency, Eggsy slyly switches the drinks, causing King to poison himself by accident. Just as King succumbs to the poison, he reveals to Eggsy that Valentine plans to cull the human race by transmitting his "neurological wave" worldwide via satellite network in the next few hours, believing this will avert the extinction of the human race to bring in a new world order. King then calls Eggsy a 'dirty little fucking prick' before finally succumbing to his death by the poison. His position as Arthur would later be taken by Sir Giles following the deaths of Valentine and his forces.

It was later revealed in Kingsman: The Golden Circle that Hart actually survived being shot by Valentine (despite having lost his eye in the process) as he and Eggsy attempt to foil a plot (formulated by Poppy Adams) that involves taking down the Kingsman Agency and controlling the worldwide drug economy. 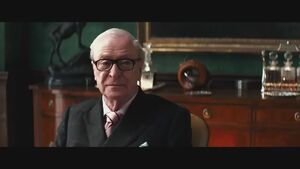 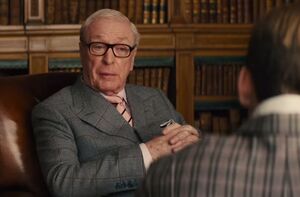