Artificially Intelligent Clones
Chester V's Holograms are minor antagonists of Cloudy with a Chance of Meatballs 2. They are holograms of their boss, Chester V.

Just like Chester V, they were voiced by Will Forte.

One of Chester's holograms appears at the beginning of the film straight after the end of the first film. The hologram invites Flint and his friends to work at Live Corp, which is actually EvilCorp which is revealed as the film progresses. They decide to do so, and the hologram then talks to Chester V about their real plan.

Later, several holograms appear in a log cabin in Evil Corp, where the real Chester is hidden. Several holograms of himself are seen doing many different things, like guitar strings and weights.

Near the end of the film, several of Chester's holograms appear and abuse Flint, but he is then able to use his "Party-in-a-Box" invention to presumably shut down all of the holograms and reveal the real Chester, who is eaten alive by the Spider Burger shortly after the holograms' dissapearance.

It's likely that after LiveCorp's crimes were exposed, Chester's holograms were deactivated and shut down once and for all. 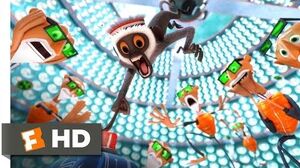 Cloudy with a Chance of Meatballs 2 - Time to Celebrate! Scene (9 10) Movieclips