Chet Butler is a semi-recurring villain from the FOX animated sitcom The Cleveland Show. He is the long-time baseball rival of Cleveland Brown, having beaten his team in the inter-school baseball championship in 1984, right in the middle of Cleveland's otherwise glorious high school years. Like Cleveland became the coach of his former baseball team, Chet is the current coach of The Mud Falls Trotters, which is now historic for being the rival team of the Stoolbend Growlers.

He was voiced by Rob Riggle.

Chet first appeared and was first mentioned in "Little Man on Campus", where he had the balls to walk back into Stoolbend and challenged him to another inter-school game.

Unfortunately, before these events, The Growler's star pitcher, Oliver Wilkerson, had his throwing arm attacked by the live bulldog, team mascot. Fortunately, Holt Richter was shown to be a great pitcher, and due to his short stature, Cleveland dressed him up like a kid and put him on the team.

On the night of the big game, Cleveland nearly had the game in the bag, before Tim the Bear showed up and blew Holt's cover for the sake of doing what's right. This was seen as cheating and it would have compromised the game, but Tim gave them the benefit to keep it a secret if they allowed his incompetent, stoner son, Raymond, play the pitcher. Raymond prompltly failed and the Trotters reigned victorious once again.

In "Escape from Goochland", Chet returned to hackle Cleveland and the guys, while they watched the Halloween baseball game between their two towns (this episode renamed Mud Falls as Goochland). After Goochland had beaten Stoolbend, Chet mocked Cleveland and left him going home, grumpy. Federline, Cleveland's designated driver accidentally backed up the car into Chet's, which then got Chet really pissed off. When they guys safely made it back to Stoolbend, Federline added insult to injury, by stealing the Trotters' team mascot, The Wooden Statue of Eunice. This of course, got them to invade their town and terrorize them.

Gus explained the Statue of Eunice belonged to them, since Goochland "borrowed" it from them years ago, and never returned it. Then, Stoolbend and Goochland went to war. In the end, Chet was eaten alive by "It", the unknown sea creature, that lived under the bridge of Stoolbend. 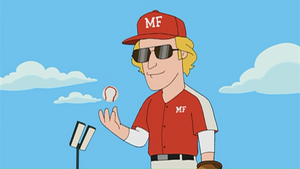