Having sex with Norma

To continue sleeping with Norma and abusing her son, Norman.

Chet Rudolph is one of the main antagonists of Psycho IV: The Beginning. He is Norman Bates' abusive stepfather, and the husband of Norma Bates. He is loosely based on Joe Considine from the original Psycho novel.

He was portrayed by the late Tom Shuster.

Chet was a deeply abusive and perverted man who often teased Norma's son, Norman, over his attraction to his mother and belittled him for it, calling him "Normy". He'd even make out with Norma in front of him just to annoy him-even going so far as to wear the robe belonging to Norman's late father to hurt him. He was also not shy about his sexual activities with Norma around Norman.

His only shred of decency, was that he attempted to bond with his stepson by boxing. However, it is more likely that he wanted to bully him, as he mocked him for not being able to handle a punch.

Chet Rudolph worked as a bartender and was also an alcoholic himself. At some point in his life, he meets Norma Bates and the two eventually marry. Chet ends up being the one who convinces Norma to build a motel as well as a house with it, so they do so. He made himself at home with the Bates, often making lewd acts towards Norma and his behavior was even further encouraged by Norma herself.

At some point during one of his boxing lessons, he punched Norman in the face and continued to tease the young boy. Finally having enough of both of them, Norman serves them both iced tea after they both have sex. Unbeknownst to them, the drinks had secretly contained arsenic in it. Once Chet realizes he's been poisoned, he starts attacking Norman, however he is powerless due to the poisoning and falls down the stairs to his death. 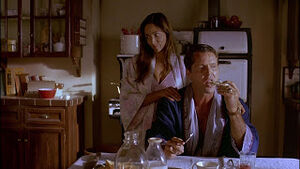 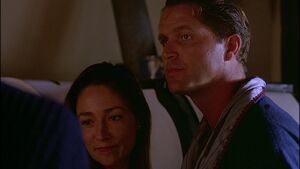 Retrieved from "https://villains.fandom.com/wiki/Chet_Rudolph?oldid=3805677"
Community content is available under CC-BY-SA unless otherwise noted.