Leader of the Vultures

Sadistic Predator
Chewa is a vulture who serves as the main antagonist of The Lion King: Six New Adventures story "Vulture Shock". He is the leader of a group of antagonistic vultures who, during Scar's reign, would pick off the starved and dying Pride Land animals that strayed into their territory.

After Scar's defeat by his nephew Simba, the Pride Land animals stop straying into the vultures territory when they migrate, much to Chewa and his flock's dismay. One day, Chewa and his friend Choyo are reminiscing on Scar's reign when they spot Simba's son Kopa passed out under a tree. The two vultures at first plan to eat him, thinking he is dead, until Choyo notices that the cub is still alive. Chewa tells Choyo that vultures are not creatures of habit to which Choyo complies, but is stopped by Chewa from rushing in to eat Kopa as the flocks' biggest rule is to always share.

The rest of the flock arrive, eager to finish off Kopa (who is still passed out) and Chewa makes a toast to his flock. When seeing Kopa flip onto his side, Chewa asks his flock if they have ever seen the cub before to which they haven't. Upon releasing that Kopa is the prince of the Pride Lands, Chewa has his flock put the cub in a high spiky nest where he can't escape, before announcing that Simba will do anything to get Kopa back and plans to keep the cub hostage until Simba gives the flock a whole menu of animals. Three vultures named Mbili, Moja and Tatu (known as The Buzzard Boyz) asks Chewa if they can deliver a message to Simba, but he tells them that Choyo will deliver the message, to the trio's disappointment as they can't sing their new song to the King and instead sing it to Chewa, who gets annoyed and agrees to let them deliver the message, but tells them not to tell Simba where Kopa is.

The next day, Chewa and his flock wait for The Buzzard Boyz to return and is pestered by the flock with pointless questions. Choyo picks up elephant scent and the flock see The Buzzard Boyz leading animals to the tree Kopa is. Seeing this, Chewa declares that dinner is served, but is displeased that The Buzzard Boyz have brought everything except dessert. Tatu tells him that they replaced flamingos with a hippopotamus named Kiboko. Soon enough, Simba and his wife Nala emerge out of the crowd and snarl at the vultures. Chewa tries to escape, but is stopped by Simba and Nala demands to know where Kopa is. Chewa claims not to know Kopa, but this fails as Kopa calls down to his parents and Simba lets Chewa go.

Chewa tells Simba that he can have Kopa back, but asks if the vultures can have a little something to eat. Simba asks what they want to which Chewa points at Simba's major-domo Zazu. Simba replies that Zazu is a trusted friend and steward to which Chewa replies that anything will do. The animals surround Chewa and say that vultures are delicious and this causes Chewa to panic, with Choyo telling Simba that he can't just come and disrupt their wasteland, but is dispatched by Nala. After the flock agree to return to their normal eating habits, Chewa begs Simba not to kill him to which Simba says that he and the flock's punishment is to listen to The Buzzard Boyz perform a solo every week. As Kopa, Simba and the others leave, Nala tells the vultures that they will be checking up on them to make sure they follow the laws of nature. 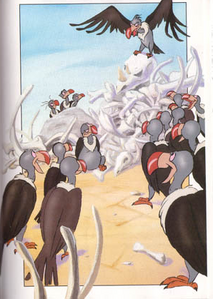 Chewa and his flock
Add a photo to this gallery

Retrieved from "https://villains.fandom.com/wiki/Chewa?oldid=3546433"
Community content is available under CC-BY-SA unless otherwise noted.