Villains Wiki
Register
Don't have an account?
Sign In
Advertisement
in: Partners in Crime, Anthropomorphic, Animals,
and 18 more

Chinese doppelgängers of Gumball and Darwin

Make money online by copying the lives of the Wattersons. (failed)

Greedy Doppelgängers
Chi Chi and Ribbit are the main antagonists in The Amazing World of Gumball episode "The Copycats" and Chinese doppelgängers of Gumball and Darwin Watterson.

Chi Chi is a cream-colored goat. He has pink cheeks and two tan horns and a bushy tail. Unlike Gumball, he wears red shoes, a tan shirt and brown shorts. He also has the same rounded eyes like Gumball.

Ribbit is a turquoise blue frog. Unlike Darwin, he wears purple shorts and doesn't sport a fin tail like Darwin, and his hands and feet are frog-like. He also has the same rounded eyes like Darwin.

This goat is attention of the center. He is serious, don’t you trust him? A heavy party-love hero with powerful personality defectives.

This frog is a frog, but why? He is so green and mighty you wouldn’t trust him with lunch. What’s that? Yes, he is determined.

Chi Chi and Ribbit first appeared checking out the exotic food section and started copying everything Gumball and Darwin do. As the Wattersons were driving home they noticed a bunch of doppelgängers, including Chi Chi's parents who copy Nicole and Richard as well.

The Wattersons survive, and the doppelgängers' truck comes right at them, and since they don’t have a doppelgänger sister, Chi Chi, Ribbit, and their parents came plunging off the bridge and into the ditch below. Their gas tank explodes, though they manage to barely survive. Since they were left too traumatized to be on the internet anymore, there was no trace of their website. It is unknown what had happened to them afterwards. 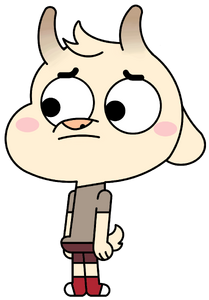 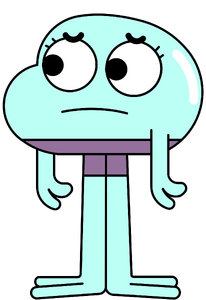 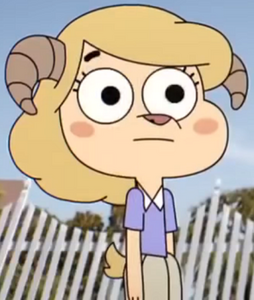 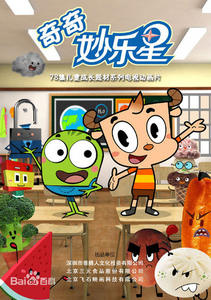 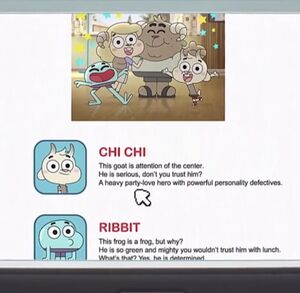