One of the main characters of the Chica's Magic Rainbow minigame

Firing their Rainbow Cannon after 3 minutes

Chica's Magic Rainbow is the secondary antagonist of the 2016 RPG FNaF World, serving as the main antagonist and final boss of Update 2. She is a mean, bullying rainbow who insults the player in her minigame, and will give them a game over if they lose too many times. Later, when fighting PurpleGeist, she will crush it and reveal herself as the true final boss.

She was voiced by Debi Derryberry.

As their name implies, Chica's Magic Rainbow is a rainbow with two eyes and a mouth with buck teeth, that arches from two white clouds. They only have 3 colors, though, those being Pink, Yellow, and Blue respectively.

Chica's Magic Rainbow first appears in the sky of their minigame as the narrator, watching the player wherever they go. They start off as friendly, cheering the player to keep going. However, after seven deaths, they start to get bitter, insulting the player for dying and, after a certain number of deaths, will try to kill the player themselves. They will also interfere with the game to try to make the player lose, shooting lasers and homing eyes at them. When the player beats the minigame, they can be seen with an annoyed expression on their face.

Later on, when the player gets to PurpleGeist, Chica's Magic Rainbow will crush them and appear as the true final boss. After crushing PurpleGeist, they will mock the player for thinking they would let them beat the game, calling them a "stupid idiotic moron". They then will begin to charge their Rainbow Cannon attack, sending out Mini Rainbows to take out the player's party. If the player lets them charge their attack, then they will receive a game over. If the rainbow is defeated, they will insult the player, calling them a cheater and threatening them that the next time they see a rainbow, that rainbow is Chica's Magic Rainbow themselves, coming to the player's house. They will then explode and disappear. 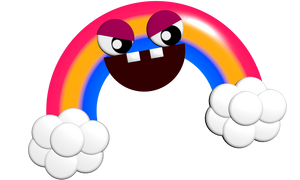 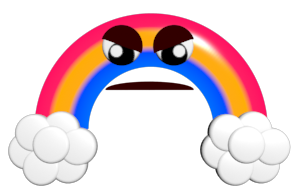 Chica's Magic Rainbow's texture for the "Great Job!" image. This also applies when she has had enough of the player dying or muting the voice.

Chica's Magic Rainbow as a trophy. 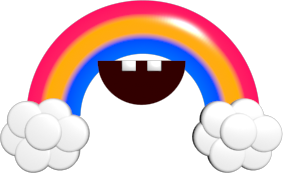