Leader of the Blue Meanies

Do away with the Beatles (failed).

Chief Blue Meanie (real name: Venuz B. Meanie) is the main antagonist of the 1968 British animated musical film Yellow Submarine. He is Max's boss, the villainous chief of the Blue Meanies, and the Beatles' archenemy.

He was voiced by the late Paul Angelis, who also played Ringo Starr, George Harrison, and the narrator in the same film.

The Chief is first seen arriving in Pepperland with his army of Meanies and begins his campaign of taking over by firing a massive glass sphere at the Beatles' doubles known as Sgt. Pepper's Lonely Hearts' Club Band, who play music all day in this colorful world, while all of the natives dance and sing and generally behave in an extremely friendly and compassionate manner towards one another. As the Chief comments "it can't last". The soundproof glass sphere covers the band, making their music inaudible, and in their panic to run away, the natives are fired at by the Blue Meanies' guns, whose missiles both drain their victims' color on contact and petrify them.

The Chief bombards the natives with various weapons and species of Meanie that vary in their ferocity and eccentricity, with anything from Meanies that will eat the toys of young children (as demonstrated when the Beatles' arrival to Pepperland, when a sharp-toothed Meanie called a snapping turtle-turk consumes a young girl's paper windmill) to reducing the flourishing hills and plants to a land of bare thorns and colorless grass, with the only green existing in the form of giant green apples that the "Apple Bonkers" (taller Meanies) drop on peoples' heads. Later in the film, the Chief engineers the kidnapping of the Beatles' friend and comrade, the Nowhere Man Jeremy Hilary Boob. When the Beatles finally arrive in Pepperland, the Chief is woken from a brief sleep and is incensed when he sees the hills and trees returning to their proper colors at the sound of their music; he sends his fiercest and destructive weapon known as "The Dreadful Flying Glove" after the heroes. The Glove is thwarted by John Lennon's song "All You Need is Love" and the Chief's army flees, knocking him over in the process. In a final petty attempt at retribution, the Chief threatens to tear the newly freed Nowhere Man into "blue burgers".

However, he is humiliated by his magic and ends up sprouting flowers from his nose and body. He flees with the rest of his army, but later contemplates "mixing" with the Beatles – however, at the very end, when the Beatles appear in the flesh to the audience, Lennon says that "Blue Meanies have been found within the vicinity of this theater".

The Chief is pompous, arrogant, tyrannical, manipulative and egotistical. He is a high-pitched, argumentative, obstreperous and flamboyant individual who is set on ruling Pepperland with fear and oppression. However, his most heinous of crimes from The Beatles' point of view is his hatred of music. He has an unpredictable, if not split personality, which sends him from apparently effeminate and friendly to raging and malicious, tough no less buffoonish in either. He is shown to be extremely abusive, cruel, insulting, disrespectful and vituperative towards Max, as he violently treats him from being punched to being shot. He also has a Meanie carrying around a stool, so that he can sit down whenever he likes; presumably, it was him to fall on the ground, it would be at the dangerous peril of the stool-carrier. He also states that the Meanies only take "no" for an answer, and gets extremely angry and impatient at the sound of the word "yes", even when being answered in the affirmative. His aggressive behavior occasionally gets the better of him and he needs to be revived with "nasty medicine", which makes him even more unconventional and eccentric than he already is. It is actually quite possible that he encourages his army of Meanies to be unpleasant and terrible, but he later admits that his cousin is "the bluebird of happiness".

Like the majority of the Meanies in his army, the Chief is masked, has light blue skin, yellow teeth, red lips, navy blue woolly body hair, a thin black line mustache, and massive paw-like hands with six clawed fingers on each. He is taller than most of them, however, and whereas the "common" Blue Meanies wear a black hat reminiscent of Mickey Mouse's ears, his hat looks more like Oswald the Lucky Rabbit's. Also, whereas the "common" Blue Meanies wear orange-and-yellow striped stockings with Mary Jane shoes, he (like his sidekick Max) wears jackboots, complete with spurs: a pale blue boot on the right foot, a navy blue boot on the left. 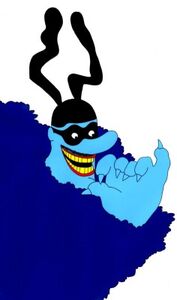 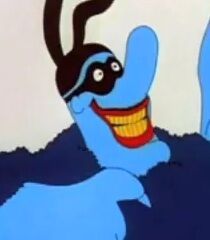 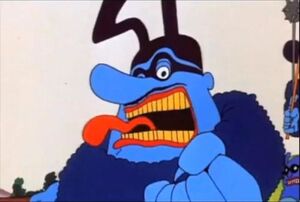 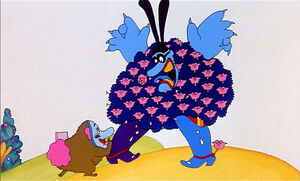 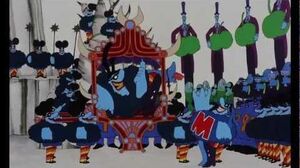