The Chief Weasel is the main antagonist of Kenneth Grahame's 1908 novel The Wind in the Willows. He is the leader of a rogue band of weasels living in the Wild Wood, and thus inspires fear amongst the local riverbankers. When Mole ventures into the Wild Wood, the weasels and their Chief spy on him menacingly, and scare Mole witless. Later, the weasels and their Chief forcefully invade Toad Hall when Toad himself is being impeded in prison. The Chief declares Toad Hall his and has the weasels do his bidding. However, Toad breaks out of prison and rejoins his friends. Badger decides that they must get the Hall back but Toad underestimates his own courage and tries to march up to the weasels and demand the Hall back but they shoot at him to get him running off. Toad therefore joins Badger, Rat and Mole in an expedition to get the Hall back for Toad and they break in through an underground tunnel when the Chief Weasel is having a feast with the weasels. Toad and the others jump out of a trapdoor right into the dining room and scare the weasels senseless, making it easy for them to drive the weasels out of the place. The Chief Weasel is beaten senseless by Toad and is presumably later arrested.

The Chief Weasel plays a very similar role in the film as he does in the novel, except in the film he and the weasels also own a large dog food factory. The Chief tries to kill Toad, Ratty and Badger by dropping them into a mincer but they are saved by Mole. The Chief then goes to Toad Hall and receives a birthday bake from his fellow weasels, but as he blows out the candles, it explodes in his face.

Before the weasels can decide who will be their new leader, Toad and his gang raid the dining room and sang a song about their friendship while the weasels were too busy fighting each other. The Chief, still alive, takes the opportunity to escape to the dog food factory in order to detonate the explosives he had supposedly placed in Toad Hall. Toad spots him and gives chase. The Chief Weasel revealed to Toad that he's also planning to destroy the forest. Toad asks the Chief why he's doing this. The Chief explained to him that doing so will make him rich, before making him plummet and continuing the countdown. Toad runs back to the hall to warn Badger, Ratty and Mole (who were still singing) that they are in grave danger, but he is too late as the Chief sets off the explosives before he can reach it. However, he is unaware that Ratty and Mole had previously switched the explosives with bones that were meant to go to the factory, meaning the explosives are actually in the factory. As a result, the Chief Weasel perishes in a huge explosion that destroys the factory, and Toad and his gang are unharmed. 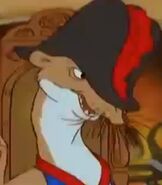 The Chief Weasel preparing to destroy Toad Hall with dynamite

The Chief Weasel dies in a huge explosion
Add a photo to this gallery
Retrieved from "https://villains.fandom.com/wiki/Chief_Weasel?oldid=3814805"
Community content is available under CC-BY-SA unless otherwise noted.