Start a Wiki
Chiester 00, also known as Siesta 00, is an antagonist from Umineko no Naku Koro ni. She is a member of the Chiester Sisters Imperial Guard Corps, which serves under Pendragon.

While 00 has the position of their cool, composed, and unexcitable leader, a position that was demanded of her, she actually has a weaker composition. 00 excels in reconnaisance and as an advance guard, possessing extreme supremacy in encounters. Unfortunately, her excess fighting power is criticized as being inhuman, so it is frequent for her to be lynched and abused when she surrenders. Her single eye tells of that.

Chiester 00 wears the same clothing and has the same bunny ears, red eyes, and bunny tail as the other Siestas. She wears an eyepatch over her right eye that she somehow lost, and she has long blonde hair. She also has a scar on her left ear. Some parts of her outfit have a black color scheme. 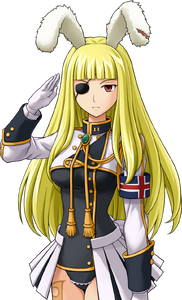 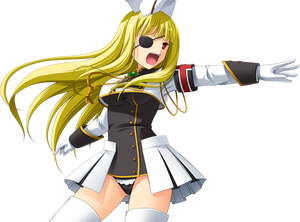 Retrieved from "https://villains.fandom.com/wiki/Chiester_00?oldid=3252356"
Community content is available under CC-BY-SA unless otherwise noted.