The Child Murderer is the unseen main antagonist of the creepypasta Squidward's Suicide. Virtually nothing is known about this person, and the narrator never comes into contact with him.

Spliced in with the videotape are two single-frame pictures and one five-frame animation. These frames all feature children being murdered by an unknown man. The first photo features a young boy in only his underwear, approximately 6 years old, with a mangled and bloody face and his left eye removed and popped.

The boy's stomach has been cut open and his entrails are laying beside him. The murderer's shadow is visible in the photograph, which appears to have been taken on a road.

The second photo is of a girl around the same age as the boy. She is laying on her stomach, with barrettes laying on a pool of blood next to her. Like the first child, her left eye has been removed and popped and she is wearing only underwear. Her back is crudely cut, and her entrails are lying on top of her. Again, the photographer's shadow is visible in the frame. The animation features another boy, again around 6 years old. A large hand is pulling the boy's entrails from a stomach wound and his eye focuses on it.

After the protagonists watch the videotape all the way through, a police investigation is conducted. It is found that the episode had been tampered with, but no information on the kids in the photographs can be found. The time stamp showed that the editing took place a mere 24 seconds before the protagonists began viewing the episode, and no glitches are found in the time stamp. 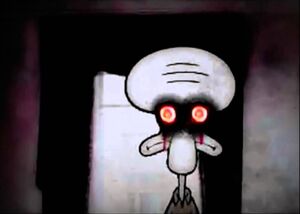 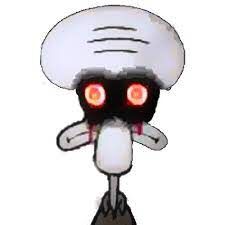 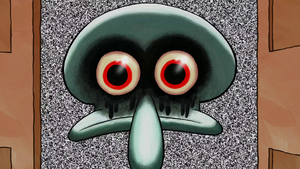 The Squidward's Suicide reference.
Add a photo to this gallery

Retrieved from "https://villains.fandom.com/wiki/Child_Murderer?oldid=4337541"
Community content is available under CC-BY-SA unless otherwise noted.