The Children of the Corn

Kill adults and sacrifice many believers and non-believers alike to He Who Walks Behind the Rows. (varies by adaption)

The Children of the Corn were once the innocent children of the isolated town of Gatlin, Nebrasha who were corrupted by the wicked entity, He Who Walks Behind The Rows, and led by Isaac who acted as the human representative of the demon god spirit who led the evil cult in which the demon god was worshipped as a twisted depiction of the Christ. Isaac spread the worship of his awful deity to all the older children of the fictional town of Gatlin and when he had all of them under his command, he ordered them to kill all the adults in Gatlin, leaving only his teen worshipers.

Isaac then imposed the demon god's rule to all his followers, forbidding games and leisure and having everyone older that 19 or 21 years old, and every passer by, sacrificed in the cornfield. In the novel, the teen children fail to kill the main protagonist who escapes in the cornfield and gets killed by the demon god himself, and to punish that failure "He who Walks Behind he Rows" decreases the age of sacrifice to 18 or 19 years old.

In the first - and most famous - movie adaptation, the second-in-command Malachai takes over the cult and binds Isaac to a corn-cross, planning to sacrifice him to the evil deity, but Isaac gets recursed by "He who Walks Behind the Rows" who kills Malachai through him. Isaac apparently dies alongside his master when the protagonists and all the children who broke free of the demon god's grasp manage to set the cornfield ablaze.

Isaac is the main antagonist in the novel, 1984 original adaption, the 6th installment and 2009 remake. He is the leader of the cult and also claims to be the messenger of He Who Walks Behind the Rows. In the 1984 adaption, he is responsible for the mass murders of most if not all the adults in Gatlin.

Malachai is the secondary antagonist in the novel, 1984 orignal adaption and remake. Being the teen enforcer, he is the 2nd in command who carries out most of the murders. In the novel and 2009 remake, Malachai is loyal to Isaac and does not oppose his command nor judgement. However in the 1984 original adaption, toward the end of the film, Malachai put Isaac's leadership in question, and even had him sacraficed, though it would lead to his demise. 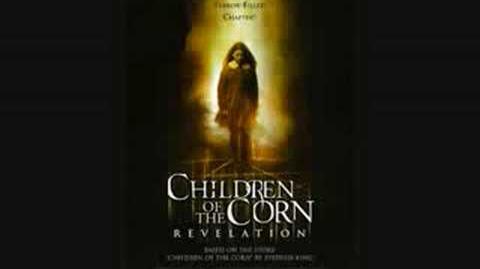 Children Of Corn Theme
Add a photo to this gallery

Retrieved from "https://villains.fandom.com/wiki/Children_of_the_Corn?oldid=3916343"
Community content is available under CC-BY-SA unless otherwise noted.