Do as Sir Fox commands.

Childs was a psychopathic villain/henchman who appeared in Marvel UK as the right-hand man of Sir Marcus Grantby-Fox.

Childs was a Lieutenant in the Parachute Regiment during the Falklands War. He had illegally executed Argentinean POW's but trod on a land mine before he could be court-marshaled. Next, he was subjected to a super soldier program similar to the one the former U. S. soldier Nuke had been through, which was developed by Khan and four others: Doctors' Stratton, McDonald, Ogilvey and Brown. Dr. Khan also gave Childs a genetically altered organ to control his moods and increase his fighting ability by producing the same drugs that the pill-popping Nuke had used. Apparently, there had been six British Super Soldiers: Hauer, Childs, Dalton, Turner, Wright, Black. They were lead by the Cabinet and answered only to the Prime Minister.

Around the time Nuke had died after foughting Daredevil and Captain America following his deadly rampage through the streets of New York, the British super soldier program was cancelled, and Hauer was placed in suspended animation. But this was not before their last mission, which was on the Thai/Cambodian border. By this time, Childs was addicted to the "Reds" and developed increasingly chaotic, violent tendencies. During the mission, Childs lost control again, killing many of his companions. Hauer survived and returned to England, albeit badly injured, while the others where all presumed dead. However, Hauer remembered seeing Dalton limping away, following Childs' terminal tantrum.

Soon after, Dr. Khan's breakthrough in genetically engineered organs was squashed by Whitehall for reasons of "National Security"; the other scientists on the program were killed when they tried to go public with their creation. Meanwhile, details of a mission against IRA terrorists where Childs lost control and shot an innocent man stirred Hauer's memories.

After the events on the Thai/Cambodian border, Childs' body had been recovered and patched up. Sometime later, he was body guarding for Sir Marcus when the news came through that his old enemy Hauer had revived from suspended animation and escaped. Sir Marcus sent army troops to stop Hauer, fully expecting them to be defeated. During that time they discovered that the car Hauer was using was that of journalist Sarah Wilde, and it was headed south, towards Bradford, Dr. Khan's home. Sir Marcus ordered Childs to kill Khan, Hauer, and Wilde, supplying him with a crack team of SAS as reinforcements. Childs managed to shoot Khan but not Hauer or Wilde. In his determination to kill Hauer, he shot one of the SAS men that got in his way, but his enemy still escaped.

Childs was then placed in charge of Sir Marcus "Super Squadies" as back up for a superhuman United States operative, the USAgent. USAgent had been told Hauer was a Commie traitor. Childs wanted to kill Hauer himself, saying that the USAgent was crazy. Instead he was ordered to hold back and only use the Squadies should USAgent be defeated. USAgent found Hauer on the Thai border and was about to finish him off when Childs went against his orders and deployed the Super Squadies. Hauer convinced USAgent of his innocence and they began fighting back. Meanwhile, from above, Childs ordered the pilots of his military airplane to go to surveillance distance and watched the battle. Hauer, USAgent, and Dalton (the other surviving super soldier) soon finished off the Squadies, and Childs ordered the pilots to take him down, so he could do the job himself. After the pilots began arguing, he shot one of them. Sir Marcus then appeared on the communications screen; he had been watching Childs' progress via satellite, and he wasn't happy. He activated Discipline Level One on Childs' control implant and ordered him to return to London.

Later, at Canary Wharf, headquarters of Empire Chemical Enterprises, Childs was once again body guarding Sir Marcus. Police reports told of an Avengers Quint Jet landing in Islington, and shortly after Hauer and his companions arrived and attacked the H.Q. Childs ambushed Hauer and Wilde as they came out of a lift, shooting Sarah down. Believing her dead, Hauer leapt at Childs, punching him through a wall and into an office desk. Childs stood up with his combat knife in hand and the two fought each other, resulting in Hauer slicing Childs' right hand off. Eventually Childs was defeated and tossed through a window only three floors from the top of the building. Childs barely survived the fall, and after losing all feeling in his legs, he heard a noise. The noise was coming from an oncoming train, Childs had landed across a set of train tracks. Unable to move, Childs was flattened by the train and presumably killed. 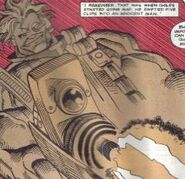 Childs in a rampaging state

Childs "guarding" Sir Fox, who orders him to do what he does best.. murder.
Add a photo to this gallery

Retrieved from "https://villains.fandom.com/wiki/Childs?oldid=3700986"
Community content is available under CC-BY-SA unless otherwise noted.