Lord of the Snowy Plains

Chill Penguin is one of the eight mavericks in the original Mega Man X.

He is voiced by Ryuzo Ishino in Japanese and Dean Galloway in English.

Chill Penguin was once a Maverick Hunter from the 13th Polar Region unit. One day, however, Sigma paid him to work for him, which Chill Penguin found better than wandering around the South Pole all the time with nothing to do. It is also implied that he chose to work for Sigma because he was jealous of X. Chill Penguin then killed his commander and joined Sigma's rebellion. He was tasked with creating avalanches in order to crush cities with massive piles of snow. X managed to stop and destroy Chill Penguin before he was able to do so.

In battle, Chill Penguin shoots ice balls, slides on his belly and uses a switch on the ceiling to create a blizzard. His weakness is the Fire Wave when playing as X, and the Wild Horse kick when playing as Vile in the remake. 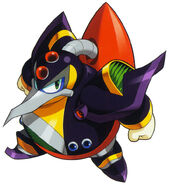