Chilled is a space pirate and Frieza's ancestor and the main antagonist of Dragon Ball: Episode of Bardock.

He was voiced by Ryūsei Nakao in Japanese and Richard Steven Horvitz in English.

At one point, Chilled sent two of his soldiers, Toobi and Cabira, to Planet Plant so they would take it over. However both were killed by the Saiyan, Bardock, who had somehow been sent back in time after his attempt to defeat Frieza. After 10 days with no word from his soldiers, Chilled went to Planet Plant himself to figure out what was going on. Upon arriving on the planet, he impaled one of his men through the chest for being in his way. Chilled then decided to pretend he and his soldiers were part of the Space Police, allowing him to trick the people of Plant into telling him what happened to his men and find the one responsible for their defeat. But Chilled hadn’t cleaned his arm off after killing his soldier and Berry, one of the Plants, grew suspicious of him. He went to Bardock to ask for help as Chilled had his soldiers terrorize the Plants. After coming across Ipana, Berry’s father and a doctor, healing a child, Chilled saw how the fluid he was using could heal wounds instantly. He ordered his soldiers to obtain it, but Bardock intervened and rescued Ipana. Upon seeing Chilled, the Saiyan angrily punched him in the face, thinking he was Frieza. However Chilled was easily able to fight Bardock off with a few kicks and started crushing him, saying he was the most powerful being in the universe. Chilled prepared to finish him off with his Death Razor and Berry tried to save Bardock. However Chilled just fired the attack at him instead, badly wounding the Plant, but this caused Bardock to become enraged, remembering Frieza and his crew, and transform into a Super Saiyan. He continued to fight Chilled, but this time, Bardock was able to take him on much more easily. Overwhelmed by the Super Saiyan, Chilled tried to destroy him and Planet Plant with a Death Ball containing every shred of energy he had. However Bardock was able to push it back with his Final Spirit Cannon, combining the two attacks and blasting Chilled into space. He floated through space, clinging to life by a thread, and was found by a spaceship of his men. They put Chilled in recovery and he thought back to Bardock’s Super Saiyan transformation. He told his men to tell his descendants of the golden transformation before collapsing in fear.

Chilled is as ruthless and arrogant as Frieza, King Cold, and Cooler, as well as somewhat childish. He is also extremely confident in power, becoming highly angry and desperate when fighting an opponent stronger than him. Chilled even denied that there could be such a being.

Chilled is quite powerful and possesses superhuman natural abilities, as well as the ability to manipulate energy in the form of blasts and flight. He can use the Death Razor, a pink energy wave fired from his finger that generates an explosion upon impact, and the Death Ball, a large ball of energy that has the power to destroy a planet. Chilled can also survive in space and stretch his tail to great lengths to strike his enemies. 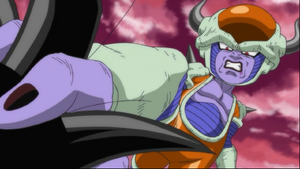 Chilled with Bardock under his foot. 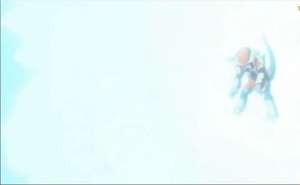 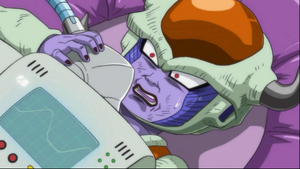 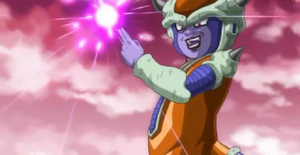 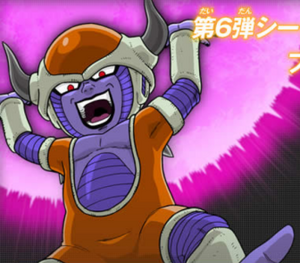 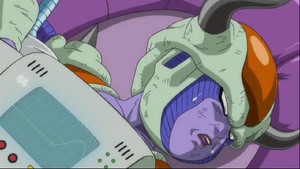