He was portrayed by the late Richard Bakalyan.

The students persuade wealthy businessman A.J. Arno to donate an old computer to the college. Arno is the secret head of a large illegal gambling ring, which used the computer for its operations.

While installing a replacement part during a thunderstorm, Riley receives an electric shock and becomes a human computer. He now has superhuman mathematical talent, can read and remember the contents of an encyclopedia volume in a few minutes, and can speak a language fluently after reading one textbook. His new abilities make Riley a worldwide celebrity, and Medfield's best chance to win a televised quiz tournament with a $100,000 prize.

Riley single-handedly leads Medfield's team in victories against other colleges. During the tournament, a trigger word causes Riley to unknowingly recite on television details of Arno's gambling ring. Arno's henchmen kidnap Riley and plan to kill him, but his friends help him escape. Arno's home is being painted, and in the rescue effort, Riley's friends put paint in the gas tanks of the henchmen's cars, causing them not to start, and following a brief chase in his own car, Arno ends up in a pile of hay.

During the escape, Riley suffers a concussion which, during the tournament final against rival Springfield State, gradually returns his mental abilities to normal; one of his friends, however, is able to answer the final question ("What is the geographic center of the contiguous United States?"). Medfield wins the $100,000 prize. Arno and his henchmen are arrested when they attempt to escape the TV studio and crash head-on into a police car.

Now You See Him, Now You Don't

Learning of the tournament from Druffle too late, Dexter misses the plane and is forced to watch the competition on television where Higgins' game against two professionals is a disaster, missing the cut, and finally being washed up in the current of the ocean water. In his business office, Arno and his henchmen, Cookie and Alfred, also watch the tournament and ponder Higgins' odd inconsistency. Upon returning to the college, Higgins tells Lufkin that Druffle's bee experiment is the school's last chance. Both men are stunned when just then Druffle appears swathed in bandages after being attacked by the bees, to which he is allergic. Hoping to assuage the crestfallen Higgins, Lufkin suggests that they give Dexter's unproven formula a chance and the dean reluctantly agrees.

That evening, Cookie, disguised as a janitor, sneaks into the campus lab where he witnesses Dexter and Schuyler using the invisibility spray, and reports to Arno, who orders him to return and steal it. The following day, Forsythe and members of his committee arrive on campus to judge the best science experiment at the college. Unaware that their spray bottle has been replaced by Cookie, Dexter and Schuyler make their presentation and are stunned when it has no effect. Disappointed and angry, Forsythe and Higgins depart as Dexter remains confused until he chats with Charlie, the janitor. Learning that there is no night janitor, Dexter realizes that Cookie was a spy and likely stole the formula. Concluding that Arno must be behind the theft, Dexter plants a walkie-talkie in his office.

A couple of days later, Schuyler overhears Arno plotting with Cookie to rob the Medfield Bank by making themselves and the money invisible. Certain that if he could retrieve the formula before the Forsythe Award announcement that night he could still win the contest, Dexter sends Schuyler to the police and goes to inform the bank's president, Wilfred Sampson. When both the police and Sampson dismiss the boys' story about invisibility, Dexter and his friends gather outside of the bank to make plans. While an invisible Arno and Cookie knock out the guards and take the money, Dexter unsuccessfully tries to use a fire hydrant to hose the men down as they exit the bank. When Sampson realizes a theft has occurred, he contacts the police who join the college students in a wild chase of the car driven by the invisible robbers.

After briefly eluding everyone, Arno orders Cookie to make the car invisible, but they are spotted on a dirt road in a park. Deducing Arno will not leave town but go to his home instead, Dexter drives there and forces Arno's car into a neighboring pool where it, the money, and the men become visible. Arno and his henchmen are arrested at the scene and taken off to jail.

The Strongest Man in the World

Krinkle has a mole on the inside who tells the Krinkle president about the formula. Hearing this, he hires A.J. Arno and some of his goons just released from prison to steal it. They break in, but are almost caught before they can get it. They then kidnap Schuyler (as no one knows that Dexter's chemical was the vital ingredient of the formula, rather than Schuyler's vitamins). They take him to Chinatown where they use Chinese torture and hypnotism to get the formula. They then hypnotize him to return home and not tell what happened to him. This accidentally causes him to steal a police car, leading to a car chase which gets him thrown in jail. Fortunately, without Dexter's chemical added in, the formula Krinkle Krunch has in the cereal does not give super-strength; when the Krinkle president tries it he ends up breaking his hand. While he berates the mole on the phone, the mole realizes that if they do not know that the formula does not work, then Medfield does not know either and will lose the weightlifting competition.

Dexter realizes it was his formula that gave the cereal super-strength; he sets off to the lab to get it, taking the Dean's beautiful but slow vintage car. When he finally gets there, he is confronted by Arno and ten of his goons. By drinking some of the formula, Dexter is able to beat up all the men, then use the Krinkle mole to strike A.J. Arno and his men down like bowling pins. He hears on the radio that he must return to the contest in four minutes or forfeit. He adds some formula to the car's fuel tank, which makes it race off at high speed, shedding parts as it goes. He makes it in time to compete last, but the car is a complete wreck, to the dean's horror.

Medfield is losing badly, but Dexter uses the last of his super-strength to lift the 1,111-pound weight and win it for Crumply Crunch and Medfield. Higgins and Quigley get to keep their jobs, Arno is imprisoned yet again and the scheming Krinkle president breaks his hand again, after eating the wrong cereal. 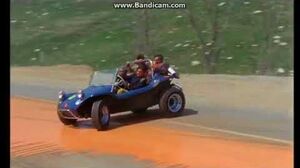 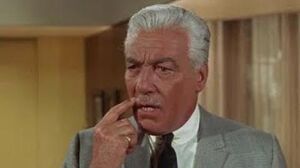