Create a world where the strong rule over the weak (failed)

Wrathful Anarchist
Chojuro Kon, villain name Chimera, is one of the two secondary antagonists (alongside Slice) of the 2019 Japanese superhero anime film My Hero Academia: Heroes Rising. He follows Nine's goal of bringing about a different world where the strong rule over the weak. He is voiced by Shunsuke Takeuchi in the Japanese version and Greg Dulcie in the English version.

Chojuro is an animalistic-looking man with traits of different animals. While he retains a humanoid figure, he has blue skin, the head of a wolf, the talons of an eagle, and the tail of a crocodile. He wears a brown trenchcoat over a blue dress shirt and jeans fastened with a belt, and often has a cigar in his mouth. He styles his dark hair into dreadlocks.

Chimera has a deep hatred for society due to being ostracized for his animalistic traits, so he wishes to create a society ruled by the strong alone. However, he can also be a hypocrite as he mocks Mezo Shoji's mutant appearance despite how he himself was treated in the past.

Chimera: Chimera's eponymous Quirk grants him the characteristics of various animals. He is able to sprout new animal traits at will, such as wings and horns. He can also enlarge his animal traits to monstrous proportions, granting him a tremendous boost in strength and durability.

Fire Breath: Chimera is also capable of breathing fire from his mouth. He can also fire it as a beam.

Superhuman strength and energy: Chimera is extremely strong and durable, enough to be able to fight multiple people by himself. He is also perceptive and quick-thinking as seen when he singlehandedly holds off all of Class 1-A. 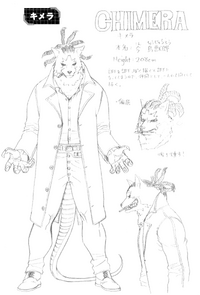 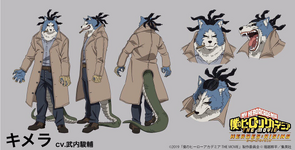 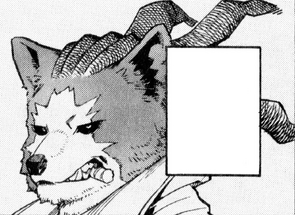 Retrieved from "https://villains.fandom.com/wiki/Chimera_(My_Hero_Academia)?oldid=4105723"
Community content is available under CC-BY-SA unless otherwise noted.