Searching for and parasitizing potential hosts

Parasitize and takeover their hosts.

Evil Creations
Chimera Anima (キメラアニマ in Japanese, Predasites in 4Kids) are the monsters that the aliens use to attack the Mew Mews throughout Tokyo Mew Mew. There are jellyfish-like creatures used to create the Chimera Anima known as Parasite Aliens (Infusers in the 4Kids dub). In the Playstation game (sometimes also in the anime) they are called Para Para for short.

Chimera Anima are monsters created by alien warriors Kish, Pie, and Tart when they use small blob-shaped jellyfish-like parasites called Parasite Aliens to merge with an animal (in the anime also with a plant, or a human spirit stolen from people) to make them monstrous and under their control.

However, the Red Data Animals' DNA prevents any attack of the Parasite Aliens, so they do not become host of the parasite. When they are defeated by Ichigo Momomiya, Mint Aizawa, Lettuce Midorikawa, Pudding Fong, and Zakuro Fujiwara, their host reverts back to normal and Masha eats the Parasite Aliens.

In the Tokyo Mew Mew à la Mode manga, the Saint Rose Crusaders take over the remaining Chimera Anima in their plans for world domination.

These are the Chimera Anima that appear in the Japan-only Tokyo Mew Mew PlayStation game: 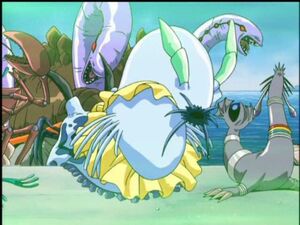 Retrieved from "https://villains.fandom.com/wiki/Chimera_Anima?oldid=3988852"
Community content is available under CC-BY-SA unless otherwise noted.