Going back on their revenge.

Get rid of Wonderland without any interference from June and her friends (formerly; failed)

The Chimpanzombies are the (former) main antagonists of Nickelodeon's 30th feature film Wonder Park. They are small stuffed chimpanzees that used to be known as the Wonder Chimps, and are corrupted by a strange darkness with a purpose to destroy Wonderland. They are also June Bailey's former arch-nemesis.

Their vocal sound effects were provided by Frank Welker.

The Chimpanzombies first appear when they attack June and the animals by failing to fix the park's mechanism. In the chaos, June gets separated from the animals and finds herself in a floating chamber known as Zero-G Land.

There, June finds Peanut hiding from the Darkness and confesses he felt lost after he stopped hearing the voice in his head, this leads June to realize that the Darkness was created by herself as a result of her cynicism from her mom's illness, the Chimpanzombies break in and take Peanut as their prisoner, but June manages to escape.

June runs back to the animals to tell them she found Peanut but also confesses that she is responsible for the Darkness. Feeling upset over this revelation, they abandon her. After noticing the piece of the blueprint and realizing that she has been able to create the ideas for the park herself, June manages to fix one of the attractions to catch up with the animals and make it to the park's mechanics. She also explains why she created the Darkness, and seeing that she wants to help, the animals reform the team to save Peanut and Wonderland.

The gang finds the Chimpanzombies taking Peanut to get sucked up into the Darkness. The animals fight back while June rushes to save Peanut by jumping into the void. She promises him that she will provide the voice for his imagination and that he should not let the Darkness take over him, giving him an idea to make a slide out of bendy straws to escape. While the gang and Peanut are riding the slide to avoid the chimpanzombies, June then notices that the park's mechanics is her name written in cursive, just like the blueprint piece. With Peanut's help, they get the mechanics back up and running by using her name to move the gears, and clear up Wonderland from the Darkness. A cloud remains over the park, to which June interprets as a reminder to continue to be imaginative.

June returns home, and with it, her now cured mother, and they set up a Wonderland in their backyard. June then shares with other kids the story of Wonderland.

The Chimpanzombies are first cunning, bad, corrupted, sarcastic, abusive, sadistic, short-tempered, and loud. They plot to destroy Wonderland out of greed. But at the end, they became kind, proud, smart, happy, good, fun-loving, and caring.

The Chimpanzombies are small stuffed chimpanzees who wear different clothes and hats. 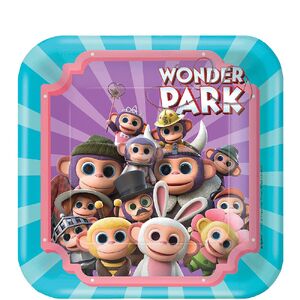 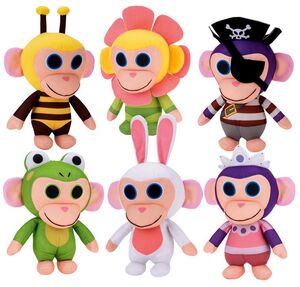