Leader of the Lighting Group

Get revenge on the villages responsible for her clan's demise.

Kill Sasuke Uchiha (all formerly).
Protect Kumogakure and Kirigakure to atone for her sins.

Chino Chinoike is the main antagonist of Sasuke Shinden: Book of Sunrise and its anime adaptation in Naruto Shippuden. She is one of the two surviving members of the Chinoike Clan.

She was voiced by Ai Kakuma in the Japanese version, and by Xanthe Huynh in the English version.

Chino has short, neck-length, spiky light-blonded hair. Two thick strands reach onto her rosy cheeks. She also has violet eyes with small brows. However, they turn red when she activates her Ketsuryūgan. Chino is small for her age, as Sasuke pointed out that she looked ten years old when he first met her and was surprised when she told him that she was in fact much older than him. When she was younger, Chino's hair was longer, almost reaching her waist.

At first glance, Chino appears to be childlike, sweet, and timid. When she first meets Sasuke, she quickly defends him from being attacked by villagers who mistook him as a member of the Dark Thunder Group, and apologized to him on the villagers' behalf. She also offers him information on the group and the strange events surrounding the disappearances of Konohagakure, Kumogakure, and Kirigakure shinobi. However, behind this façade, she is actually cold-hearted, manipulative, and vengeful. Due to being raised as a weapon and blaming most of the Five Great Nations for her clan's demise, Chino is determined to achieve revenge by kidnapping many of the village's shinobi to use them against each other, and is willing to kill them to make herself feel more satisfied.

The only person Chino genuinely cares for is Nowaki, whom she is protective of and considers as a brother. She is even willing to give her life to save Nowaki when she fought Sasuke Uchiha in the Valley of Hell.

Although she is initially kind to Sasuke when they first met, she actually despises him due to his clan being partially responsible for her clan being exiled. She also calls him a hypocrite; Sasuke was once someone consumed with hatred and plotted to destroy Konoha for what it did to his clan, and now he is trying to stop her from doing the same thing to the nations when she herself was unable to go out and create the bonds she so desperately desired despite never committing any crimes in the past. She also condemned him for always "having someone who loved him no matter how much he ignored it".

After her battle with Sasuke, Chino realizes the error in her ways. Like him beforehand, she allowed her emotions to cloud her judgment and she was inadvertently trying to destroy the peace she desired for. She felt very guilt-ridden and was ready to face the consequences for her actions, but was surprised and happy when she learned Sasuke put in a good word for her and Nowaki to work for Kumogakure and Kirigakure to atone for their crimes.

Chino is one of the last two surviving members of the Chinoike clan, Chino was kidnapped by En Oyashiro, who had been collecting shinobi in possession of a kekkei genkaiwhen she was very young to the point where she forgot her parents' faces. He raised her into a merciless and vengeful shinobi, giving her the task of capturing other kekkei genkai users and eliminating threats.

Upon learning her entire clan had been wiped out by enemies and angered by the mistreatment from En, Chino flees from him and sets out on her own path. Along the way, she meets Nowaki. The two then band together and travel together, robbing rich people of their goods for themselves to survive. However, Chino was not able to let go of her hatred towards the villages, which she blames for allowing her clan to perish.

In the anime version, however, Chino is revealed to be the daughter of En, who slaughtered the entire Chinoike clan to protect Chino from the clan's plot to seek revenge against the Uchiha clan. This and their familial connection was concealed by En who led Chino to believe he kidnapped her. After awakening her Ketsuryūgan, Chino met Nowaki (who is really Fūshin) when she fought and defeated him during her debut at the Coliseum. They bonded over their loneliness of being ostracised for their abilities and having no families. It was Chino's desire to find her clan at the Valley of Hell that prompted the escape of herself, Fūshin, Karyū, and two others. They formed the Lightning Group and began stealing money for the poor villages before being betrayed when Kirigakure began interfering. The group dissolved with Chino and Fūshin the only ones left. Upon reaching Valley of Hell and seeing it empty with evidence of her clan being dead, Chino vowed revenge on those responsible for her clan's demise.

Chino first appears when Sasuke arrives at a bamboo village in the Land of Hot Water, and she sees Sasuke being mistaken for being a member of the Dark Thunder Group by a villager named Iō and is attacked. Chino intervenes and diffuses the situation, and apologies to Sasuke. She introduces Nowaki to him and explains what the Dark Thunder Group is and all the chaos it has caused the village, including the murder of Iō's daughter in a nearby village. Chino and Nowaki take Sasuke to Iō's daughter's village to investigate, and she asks him questions about the Uchiha Clan and his indecisiveness of living in Konoha. When the group attacks once again, Chino fights back with taijutsu and is able to defend herself and Nowaki. She later alerts Sasuke that Iō killed its leader, Karyū, by setting the house on fire.

After Sasuke leaves to meet with Orochimaru, Chino and Nowaki also leave. He finds them on an isolated island with missing Kiri and Kumo shinobi, and when they cut themselves, he detects unusual chakra from them. Realizing he has found out their scheme, they attack him. When Sasuke defeats Nowaki, Chino protects Nowaki and reveals herself as an enemy before attacking him with Ketsuryūgan genjutsu and fleeing.

Chino and Nowaki find refuge in the Valley of Hell, but they are found by Sasuke shortly after. Chino challenges him to a battle, which she is confident she will win. She initially overpowers Sasuke with her Ketsuryūgan, but she grows angered at Sasuke for refusing to let her continue pursuing revenge. She berates him for trying to stop her when he once did the same things, and is disillusioned why he changed his mind. Hearing Sasuke reply that his friends saved him from darkness and he fights for peace causes Chino to question her own resolve. Sasuke uses genjutsu to ware her down, but he assures her that he will not kill her, and she accordingly surrenders.

Chino explains to Sasuke about her hatred for the villages after they used and destroyed her clan, and that she fears peace can never be maintained. Sasuke promises her that he will always protect the peace she longs for, and she and Nowaki agree to be taken to prison to face judgement for their crimes. The Sixth Hokage visits with them and tells them that Kumogakure and Kirigakure are offering the two to work for them in exchange for their freedom. Although Chino and Nowaki are stunned, they agree to the proposition.

In the anime version, Chino does attack Sasuke at the command of Iō but quickly declines to continue upon seeing how strong he is. She sees Sasuke using his Sharingan to save those about to explode and realises he is a Uchiha. She explains to Sasuke that she and Nowaki are wandering shinobi who entertain for a living. As Sasuke leaves the Bamboo Village to learn more about Fūshin, Chino and Nowaki ask if they can come with him because they might be able to help him, which he relents. On the way, she asks Sasuke whether he plans to return to Konoha and restore the Uchiha clan.

Chino is surprised when they meet with Orochimaru but she gets into a fight with Karin, who is irritated at the latter for clinging to Sasuke. They travel via boat to the Coliseum to find En Oyashiro and witness how wealthy customers use their shinobi in competitions to win the losing shinobi. Chino is disturbed by this and tells Sasuke that if he doesn't help the poor and doesn't stop the rich, he is just as guilty, and she leaves with Nowaki. When more exploding humans appear, Chino is nearly killed but is saved by Sasuke, which surprises her. She and Nowaki later travel to the Land of Hot Water to find Fūshin but Chino complains they won't get to visit the hot springs. Five exploding humans appear in front of her and Nowaki but Sasuke saves them before going after someone who tried to attack him.

Sasuke arrives at the Valley of Hell, where he finds Chino waiting for him, and she reveals herself as the sole survivor of the Chinoike clan. She lashes out at Sasuke of how her clan struggled to survive after the Uchiha clan forced them to live there and is amused that Sasuke is interested in listening. She reveals her past of being kidnapped by Oyashiro, meeting with Fūshin and escaping with him, helping others before being betrayed, and vowing revenge upon finding no members of her clan survived. Chino challenges Sasuke into a battle to settle the feud between their clans, but Sasuke's disinterest in fighting and his superior abilities frustrate Chino. She cuts his arm and uses genjutsu to reveal her plan to turn him into an exploding human but she is left shocked when Sasuke uses his Sharingan to prevent this. Devastated, she cries out how unfair it is that Sasuke still has people who care about him despite his past whereas she was always lonely and wasn't a criminal. Chino asks Sasuke why he goes so far to protect Konoha despite how it played a role in his clan's downfall, and Sasuke replies he has a friend who shares his pain. Fūshin arrives and offers to be killed to spare Chino, who asks him not to since his death would really leave her alone, and she surrenders. Chino, Fūshin, and Karyū are sent to jail but the Mizukage arrives to offer them freedom and a chance to work for her in order to atone for Kirigakure's betrayal and other sins they committed over the years. All three accept and Chino learns from the Sixth Hokage that Sasuke returned to the Coliseum to free the shinobi from their owners, which amazes her. 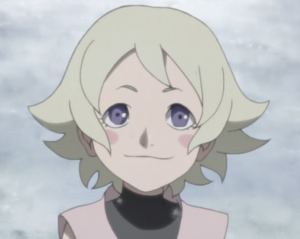 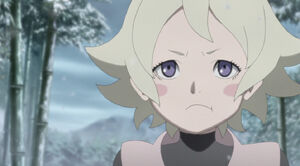 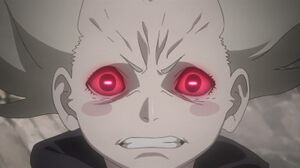 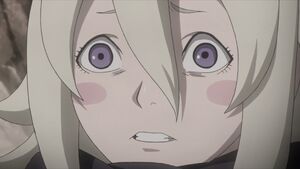 Chino shocked of finding out the truth about her past. 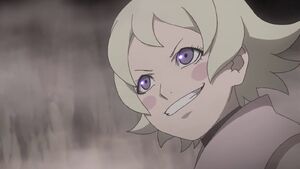 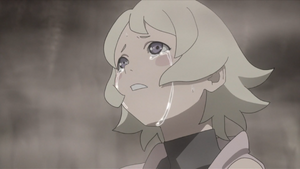 Chino tearfully seeing the error of her wrongdoings.
Add a photo to this gallery

Retrieved from "https://villains.fandom.com/wiki/Chino_(Naruto)?oldid=4266615"
Community content is available under CC-BY-SA unless otherwise noted.