Being admired by his fans.
Forcefully empowering P.O.I.N.T. Prep students.

Chip Damage is a major antagonist in the 2017 series OK K.O.! Let's be Heroes, serving as the central antagonist of the "P.O.I.N.T Prep" arc and the overall secondary antagonist of Season 2. He is an android build by Dr. Greyman that serves as a member of the superhero team P.O.I.N.T. and the principal of P.O.I.N.T. Prep, who is later revealed to secretly be behind a conspiracy regarding the forceful empowerment of the school's heroes.

He is voiced by Kurt Angle.

Following the presumed death of Lazerblast, P.O.I.N.T. began to fall apart as it's members became more distraught. In order to convince the world and themselves that P.O.I.N.T. was still dependable, Dr. Greyman decided to construct Chip, programming him to always act like a symbol of strength that the heroes around the world could depend on. This would ring true, as Chip would prove to be one of the world's most popular heroes, serving as an idol figure for younger heroes like K.O.. At an unknown point, he also became the principal of P.O.I.N.T. Prep.

In "Point to the Plaza", K.O. plays with his Chip Damage action figure at the bodega, leading to Enid dismissing him and the other "big time cookie-cutter P.O.I.N.T. heroes" like him. Following this, K.O. takes the new shipment of Chocolate Chip Damage Candy Bars to the back of the bodega, and discovers a Gloop, which he ends up feeding the candy bars to, causing it to grow uncontrollably and overtake the bodega. P.O.I.N.T. then steps in to handle the monstrous Gloop, however, when it proves too much for them, Foxtail summons Chip to take care of it. Chip is immediately admired by the citizens of Lakewood Plaza, K.O. especially, although Enid and Mr. Gar remain unimpressed. Chip begins to fight with the Gloop, but Enid soon realizes how ineffective his methods are, leading to her and K.O. sneaking into the bodega to find a way to defeat it, discovering that it cannot function in a cold environment.

Chip then arrives and ignorantly "saves" the two from danger, and, after melting the Gloop with his flamethrower hands, mistakenly believes the monster's weakness is fire and burns both it and the bodega down. Chip poses for a picture with K.O. following his supposed victory, however, the Gloop regenerates and captures K.O.. Enid tries to step in to stop the Gloop but Chip tells her to stand back, until she tells him that he has absolutely no idea what he is doing, leading to him being captured. Enid then freezes the Gloop and saves K.O. and Chip with ease. Impressed by Enid's heroism and quick thinking, Chip approaches her and offers her the opportunity to join P.O.I.N.T. Prep, before heading off to sign autographs.

In "Wisdom, Strength, and Charisma", Chip welcomes the students returning to P.O.I.N.T. Prep for a new term. He then introduces the crowd to Enid and sends her to complete the Discipline Trial, in which she must defeat one of the three literal heads of the Discipline Heads (Dr. Grayman, Foxtail, and Ms. Sunshine) to determine her chosen discipline. Despite her shortcomings at first, Enid defeats all three heads to the amazement of everyone, and Chip, unsure of what to do (as no one as ever beaten all three before), places her in Ms. Sunshine's charisma course. Following this, he approaches Sparko and tells him that his exam scores are phenomenal and that he will therefore be accepted into the gifted and talented courses, much to his pride.

In "Bittersweet Rivals", Chip is present when Foxtail holds her strength course, where two heroes must climb a pair of ropes that extend "beyond what the normal hero is capable of." While Elodie and Enid are racing to the top, the former is mysteriously empowered with a burst of energy upon falling behind and trying to explain her antagonistic behavior to Enid, the energy burst also causing the latter to fall to the ground. During this time, Chip's eyes are mysteriously seen glowing the same hue as Elodie's empowered state.

In "Are You Ready For Some Megafootball?!", Chip attends the Megafootball game between P.O.I.N.T. Prep and Lakewood, sitting in the audience next to Dr. Grayman. Late into the game, Grayman comments on the poor performance of the players and passively asks Chip if it makes him want to take control of the game himself. Smiling, Chip lights up his eyes, which causes Sparko to become empowered and completely beat out the Lakewood team. Once P.O.I.N.T. Prep's victory is totally assured, Chip releases his hold on the Sparko, who gives out one last burst of energy before plummeting to the ground, only to be saved by Enid. Chip approaches Foxtail after this and silently congratulates their victory, while Enid tells K.O. and Rad that she suspects something messed up is going on at P.O.I.N.T. Prep.

In "Mystery Sleepover", while heading to get the pizza she and Elodie ordered, Enid uses her shadow form to overhear a conversation between Sparko and Dr. Grayman. Grayman insists that Sparko cut back and take a break for the benefit of his own health, but the latter politely refuses. Grayman then tells Chip that something must be done about Sparko's over activeness, and he, with the same glowing eyes as before, agrees.

Later that night, Enid, K.O. and Rad follow Elodie and discover a secret assembly of students gathered before Chip. He declares each of them the best of the best at the academy and grants them each one power-up buff for the week, bestowing a glorb within each of them, claiming they should use it wisely or he'll have to activate it for them. He then overhears Enid, K.O. and Rad and mistakenly believes that rat people are inside the vents, and sics a security team on them. The trio escape and ponder the morality of Chip, Enid figuring that he qualifies as evil due to his granting of power boosts that drove both Elodie and Sparko berserk.

In "Final Exams", Enid wakes up and decides to continue her investigation of Chip's actions, however, she, K.O. and Rad find that the school is being quarantined due to their previous actions, and that they are under suspicion from the P.O.I.N.T. troopers. While Elodie diverts suspicion off of Enid by claiming they are going to final exams, Rad and K.O. are captured and brought to Chip's office, Enid deciding rescue them. Elodie instead insists that she and Enid do their final exams instead, leading to Enid having to head to save her friends alone. Ultimately, however, Elodie decides to join her, deeming Enid's friendship more important than finals.

Using the outfits of two of the P.O.I.N.T. troopers Elodie knocked out, she and Enid infiltrate Chip's office, where they find Rad and K.O and approach him, who seems to be unaware of their presence. After getting closer to Chip, Enid accidentally knocks his head off, causing them to realize that he is actually a robot, and that he was charging at his desk. Chip reassembles himself and demands that they hand him his rear piece back, knocking off their disguises in the process. He shows disappointment in Elodie and Enid for their actions and prepares to blast them, only for Dr. Greyman to arrive and chastise him for intimidating his students. Unfortunately, Chip glitches and turns on him, although Enid and Elodie save him from being blasted. Greyman reveals Chip's origins and that his rear is his source of power and greatest weakness.

Knowing this, Elodie, Enid, Rad and K.O. escape out the window, and, unable to use his rocket boots on his low power, Chip jumps after them. The five engage in a chase along the side of the P.O.I.N.T. Prep building, where Chip succeeds in blasting Enid and Elodie away, only for Rad and K.O. to free themselves and steal his rear from him. Enid tells Rad and K.O. to destroy it, which they succeed in doing, as Chip screams that heroes are nothing without power. With his power source destroyed, he crashes into the ground lifelessly, Rad subsequently telling K.O. that he is going to destroy his Chip Damage toys when he gets home. Back in his lab, Greyman analyzes Chip's body and states that he must've been controlled by someone else, Foxtail then stepping in and revealing that she had been controlling Chip the whole time, claiming that not all heroes are equal and that they need to choose which heroes get power.

Due to his immense popularity, Chip is built up as a pure hearted, idealistic hero, and, at first glance, he fits this bill rather nicely. He is dedicated to his heroics and puts saving the day over all else, although this is not necessarily a good thing as he often resorts to methods resulting in even more destruction rather than a lack of it. In fact, Chip is incredibly ignorant to when his methods do not work, compromising his effectiveness at solving real problems, and he doesn't listen very well when anyone attempts to talk him down and provide him with a more reasonable way of stopping a problem. When he does finally realize how ineffective he is, he is almost speechless and totally confused, yet acknowledges when he's in the wrong and congratulates those who actually do a good job. He is also a very charismatic speaker and possesses decent people skills.

In spite of his initial appearance, more of Chip's true nature is revealed as time goes on. When his involvement in the student's empowerment becomes clear, he shows that he is truly a manipulative and cunning mastermind, who is unethical and immoral at heart. While his motivation in wanting to empower his students is unclear, it seems that he puts the success and achievement of the already accomplished P.O.I.N.T. Prep students in higher regards than anything else, so much so that he is willing to provide them with glorbs to overclock their own abilities to ensure their success. He also openly admits that, if his students don't use their power-up buffs properly, he'll activate them for them, showing how determined he is for them to succeed. This also demonstrates his authoritarian and controlling personality, as he actively forces his students to win whether they want to or not, not caring about the safety of those around them, nearly letting Enid fall when activating Elodie's power, as well as their own safety, exhausting Sparko's powers before purposefully letting him plummet to the ground. It is unknown whether Chip has been like this from the start, or that he developed these traits over time. 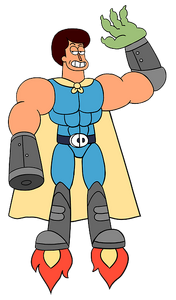 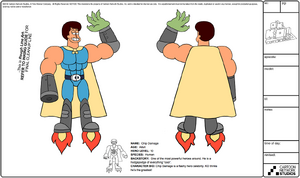 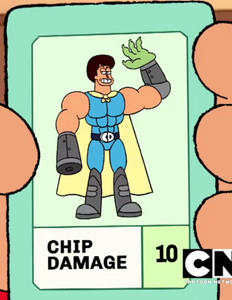 Chip's POW Card.
Add a photo to this gallery 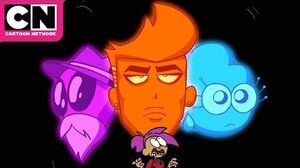 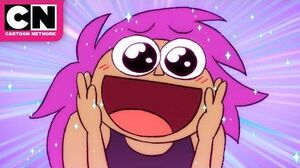 Retrieved from "https://villains.fandom.com/wiki/Chip_Damage?oldid=3534698"
Community content is available under CC-BY-SA unless otherwise noted.