Resources to have whatever
Pretending that he had a Reformation

Finding ways to be more successful.

Take revenge on the Greens.
Make the Greens leave Big City (both failed).
Become the CEO of Wholesome Foods.
Destroy The Big Coffee and The Apartment Complex (both succeeded).
Take over the Greens' House to build a new Wholesome Foods Store over it. (failed)

Chip Whistler is the main antagonist of the Disney Channel animated series Big City Greens. He is the previous manager and now CEO of Wholesome Foods, and the arch-nemesis/rival of the Greens.

He is voiced by Paul Scheer.

Nothing was known about Chip's past except that when he was little, he was more kind and gentle, but with all the privileges he had, he turned himself into an erect little narcissist that only mattered himself.

In "Supermarket Scandal", Chip approaches Bill Green of Green family farms. While Bill turns down his offer, which is to supply Chip's supermarket chain Wholesome Foods with new produce, Cricket decides to agree with the offer. He and Tilly make "produce" (actually inedible objects disguised as produce) and use them to make through on the offer. The "produce" is stocked at Wholesome Foods, to Cricket's chagrin, so he and his family decide to buy them all out. While losing the money he made from the deal, Cricket decides to resell the "produce", one of them which Chip decides to taste. Cricket tries to warn him it's fake, but he ignores him and takes a bite, chipping his tooth, so his name now fits his mouth. He then swears vengeance against the Greens.

In "Feud Fight", Chip sets up a Wholesome Foods booth at the farmers' market only for the sole purpose of running the Greens' business down. Throughout the episode, Chip tries different marketing tactics that failed (ie. recruiting Tomato-san), though his "Protocol C" - giving coupons out to everyone - tactic worked, to Chip's delight. This causes Cricket and his farmer allies to declare a tomato war on Wholesome Foods, which ended when he himself surrendered. However, Chip was not going to take the surrender, instead relentlessly pelting Cricket with tomatoes and declaring victory (only to himself, as everyone else didn't). This causes everyone, even his employees, to turning on him and leaves. Despite this Chip blames Cricket for everything. As Gramma confronts him to stop chewing tomatoes, Chip snatches the bag of illegally hot peppers to eat all of them, causing him to once again losing his tooth and running away in defeat.

In "Coffee Quest", Chip is one of many people who rushed to the Big City Docks to obtain the last bag of coffee. However, Cricket and Gloria, workers of Big Coffee, thwart Chip's plan again with Cricket's speed and Gloria's cunning. Chip loudly threatens to run the Greens out of the city, though he is unheard (reinforced by Wholesome Greg).

In "Reckoning Ball" it is shown that Wholesome Foods has been quickly losing business with people protesting in the street. All employees make fun of Chip, who is still upset about being humiliated by Cricket Green and his family, even though much of the conflict is his fault. Decide "Drive The Greens of the city, once and for all" by purchasing a wrecking ball in an attempt to destroy their house. Officer Keys just so happens to be walking along when he prevents Chip from harming them, but the ball swings back and knocks him out of the driver's seat; chipping his tooth once again. Chip meets with his father who reprimands his son for his violent behavior and threatens to kick him out of the company. He gives him a Forgiveness Contract that the Greens must sign to show that they have accepted his legitimate apology which then he will reconsider his future in the company.

The Greens are hard at work rebuilding their roof, which was slightly damaged by the wrecking ball when Chip shows up. The Greens all begin to attack him, but he calms them down by revealing that he wants to apologize. While Bill and Tilly are willing to accept his attempt, Cricket and Gramma Alice are skeptical, especially when he gives a half-hearted apology to them. Bill then suggests that he apologize by helping out with fixing the roof. It quickly becomes apparent that Chip is incompetent at something simple like hammering a nail and falls off the roof and destroys the garden. Not being able to withstand the "harsh" conditions, Chip tries to mow down the yard, but Alice stops him and he knocks himself out cold.

Chip is nursed back to health by the Greens where he admits that he is unsure of what to think about them as they have been kind to him despite his behavior. They tell him that despite their bad relationship (which they admit is mostly Cricket's fault) they still want to treat him nicely as that is what they do. He gives a legitimate apology and the Greens sign his contract though he still wants to help with the yard. Mr. Whistler finally retires and hands the company over to his son.

As Chip steps in as CEO, he quickly has his hired hands refurbish his office and calls his dentist to fix his teeth with platinum, revealing his amends from earlier were just an act. And now that Chip had Full Power and resources of the Wholesome Foods corporation in his control, nothing will stop him in order to accomplish his goal, Drive The Greens out of Big City.

In "Friend Con", after Bill couldn't find a friend at Farm Con since he and his old friend, Good Ol' Joe, "lost touch" after moving to Big City, Tilly and Cricket suggested to have Chip be their father's friend and the two spend time together.

Later, Cricket and Tilly overhears Chip that he was only pretended to be Bill's friend just so he can take over his speech in order to ruined his reputation. Before the siblings go to warn Bill, Chip, along with his employees, threw and locked them outside an alley to keep them from foiling his plans.

As Bill prepares for his speech, Chip gives him a big stack of saltline peanut butter sandwich, which causes him to have the inability to speak after eating it. When Chip takes over, he pretends to be Bill to say all the nasty and insulting things to the people at Farm Con.

After finally getting back inside, Tilly and Cricket stops Chip, and Tilly explains to the citizens that Chip is not the real Bill. However, no one can tell the difference until the guy, who reveals to be Good Ol' Joe, recognizes him.

After Bill confronts Chip that he is no longer his friend, Gramma lands on Chip with a big bag of stuff she stole, in a result of him losing all of his teeth, except for the platinum one, and runs away in defeat.

In "Chipwrecked", When Cricket tricks his family into taking them to Big Coffee to do all the work for him, Chip spies on him and his family and using a evidence board on the Green family. He is planning to drive Big Coffee out of business all around Big City so he can replace it with his own company.

Later, Chip and his employees arrive at the Big Coffee in his post-apocolayptic-style tank and orders his employees to spray coffee at the citizens to get a drink from it in order drive Big Coffee out of business. However, Cricket quickly doesn't think his plan will work and calls him a joke. Then a tow truck comes to take his truck, but Chip tries to stop it by using his feet to grab the fire hydrant. The water pressure of the hydrant goes high from the resisting, causing Chip flying to the toothpaste ad billboard, and falls into a hot dog cart and the billboard lands on him, causing one of titanium teeth to finally fallen out.

Later that night at the Wholesome Foods Headquarters, after the incident, Chip hits rock bottom and accepts having Cricket being right about him being a joke. Then, he gets a call from his father, who heard about his son skipping his boarding duties. Mr. Whistler encourages Chip to act like the CEO because he now owns the company, which he aggrees. Chip decided to make things change with an aggressive approach.

The next day, Chip arrives once again at Big Coffee, this time with his new employees whom he forces to dismantled the cafe. Gloria confronts Chip to stop this or she'll call the police but he stops her. Chip tells the Greens that he owns Big Coffee now and fires them. Cricket finally believes that Chip's plan is working, but was nervously hoping it backfires until Chip suggests that his cafe needs a extension to where the Greens' house is currently located. After Chip leaves, the Greens are in shock that their lives are going downfall.

In "Chipocalypse Now", the Greens become panic over Chip Whistler's plan to demolish their home after Big Coffee has been bought up. They are further horrified to learn that the tenants in the apartment complex next door have been kicked out. Big Coffee and the apartment are destroyed and a giant Wholesome Foods is built, with the grocery store built to shadow over the Greens' house.

Chip is a cruel, malicious, greedy, egotistical and arrogant man whose only concern seems to be making money. However, he is also petty and takes everything personally and won't stop until he childishly one-ups anyone who has done him wrong like in "Feud Fight" where he sets up a Wholesome Foods stands at the food market just to get back at the Green family for ruining his teeth. He is also shown to be immoral and doesn't acknowledge the wrongness of his actions like in the same episode where when Cricket offered peace and cooperation, Chip hits him with tomatoes, which not only made him look bad but cost him potential customers and half of his employees for harming Cricket when they realized what a jerk he was, despite giving up. However, he still blames the Greens, mostly Cricket, for his actions and continues acting immaturely while still suffering the ramifications of his actions. 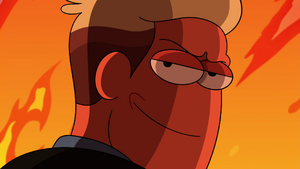 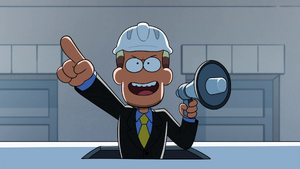 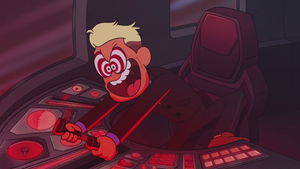 Chip's psychotic breakdown.
Add a photo to this gallery

Retrieved from "https://villains.fandom.com/wiki/Chip_Whistler?oldid=4152915"
Community content is available under CC-BY-SA unless otherwise noted.