Stopping FNAF games from being released.

Trying to get Scott to notice him (both failed).

Chipper is an optional boss from the videogame FNAF World, but first appeared as the titular main protagonist in his own game, Chipper And Son's Lumber Company.

He is the main inspiration for the Five Night's at Freddy's series as people believed he looked like a scary animatronic, and presumably his design is the basis for Freddy Fazbear.

Chipper once lived in his own game series Chipper and Son's Lumber Company where it is a peaceful land with his friends and his son "Tyke", but his world was later changed into a horror themed land called Five Nights at Freddy's, a series where animatronics roam. He now resided in the Mysterious Mines waiting for the animatronics to come into his trap.

Chipper was once an ordinary anthropomorphic beaver, wearing overalls and having a surprisingly neat hair style.

Chipper's Revenge is a large version of him with a chrome body and red glowing eyes.

Chipper was once a friendly beaver who only wanted to be with his friends, ever since FNAF world however he has became seemingly depressed, and vengeful.

It appears Chipper wants to be in his own Horror Game as it states "Freddy Fazbear will not be the one who will be sharpening his teeth on your bones. it will be me. It will be me". 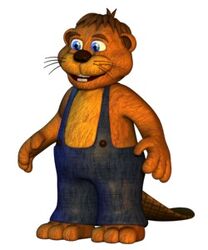