Assisting Hope's Peak Academy or any other school as homeroom teacher (formerly).

To help her students (prior to brainwashing).

To persist Junko's aim to spread despair (while brainwashed).
To push Kyosuke Munakata and Juzo Sakakura into extremism in their goals to rid the world of despair (succeeded).

Chisa Yukizome is a major protagonist turned-supporting antagonist in Danganronpa 3: The End of Hope's Peak Academy, serving as a supporting character in Side: Despair and a major antagonist in Side: Future.

She is a member of the Future Foundation, and the leader of the 5th Division. Her responsibility as leader is to gather intelligence on the phenomenon of Despair.

Chisa is a woman in her mid-twenties, around 25 at youngest (about 20-21 in Danganronpa 3 - Side: Despair). She is a young, petite, smiling woman, who comes across very cheerful and friendly. She has large green eyes and orange hair almost always tied into a ponytail. A small part of hair on the right side of her head is curled.

During her time as Class 77-B's homeroom teacher, Chisa used to wear a light blue skirt suit with a white dress shirt underneath. She would also frequently put an apron over her dress, apparently a habit from her days as a housekeeper. Interestingly, she also carries around a pair of Wakizashi as part of this attire.

In Side: Future, her color scheme is darker and more dull, making her hair appear brown instead of orange. She wears a white coat, with the Future Foundation ID pinned to its lapel, a pink dress shirt, and a black vest. She wears a black pencil skirt, black tights, and black mid-heel shoes.

Prior to the Tragedy, Chisa was shown to be brave and hard-working, with a cheerful disposition. She can be dense at times, and is described by Juzo Sakakura to be "easily absorbed" by things, to the point where she loses sight of her original goal. Because of her demeanor, she plays a role in keeping the atmosphere surrounding the Future Foundation as relaxed as possible. Much like Juzo, she is very devoted to her classmate, Kyosuke Munakata, and does not regret anything he asks her to do. Chisa also has a very strong sense of right and wrong, and frequently protests Juzo's violent nature. Despite this, the two are close.

As a teacher, she is shown to be very passionate and engaging. She is able to adjust her personality to best communicate with each student—such as being kind to Mikan Tsumiki and abrasive with Fuyuhiko Kuzuryu. She is willing to go to great lengths to teach and uses certain triggers to lure out the other students, such as using Sonia Nevermind to lure Teruteru Hanamura from the kitchen of the school cafeteria. She values interpersonal relationships, youth, and believes that there is more to life that simply talent.

After she was forcibly brainwashed by Junko Enoshima and Mukuro Ikusaba, Chisa fell into despair and lost all of her hope along with her students, even forgetting about her feelings for Kyosuke. As a spy for Ultimate Despair, Chisa acted normally and could manipulate her own emotions. For example, in Side: Future #10, she faked crying after she and Kyosuke found the dead bodies of kids; despite having personally murdered them herself in a fit of despair. Chisa put on a perfectly convincing performance of horrified sorrow as she wondered who could have done such a horrendous deed that proved to be enough to fool Kyosuke. Each time causing him to resort to more and more extreme methods of eradicating despair.

At first, it seems that Chisa kept her despair persona even after her death, as she is seen watching the Final Killing Game progress while calmly eating popcorn in the afterlife with Junko, and even seems sarcastic when talking of her own death. However, in a conversation with Junko in the afterlife, Chisa rebutts Junko's claims that the world will fall into despair, stating that the world is not done for, as hope now begins. This proves that Junko and Mukuro's brainwashing wore off once Chisa had died, but it's never clarified whether she reverted back to her original personality or not. 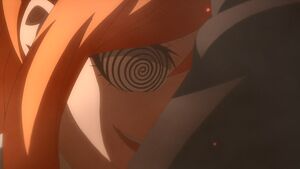 Chisa planning to throw Kyosuke into the deepest despair of all. 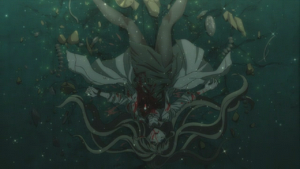 A photograph revealing Chisa's murder of a preschool.