Chitaru Namatame is one of the assassins appeared in Akuma no Riddle. She is No. 9 of Class Black, a girl with a demeanor that is both princely and mature. She was the one who showed Hitsugi Kirigaya the way when the latter got lost on her way to Myōjō Academy, and has since almost never been seen without Hitsugi.

She specializes in physical type assassinations and is an expert at swordplay. Though part of Haru's class, she has no real interest in the objective of the class; her real goal is to avenge her mentor's daughter after learning that Angel's Trumpet, the assassin responsible, will join the class as well. She aims to kill Angel's Trumpet so that her mentor could find closure and be happy again.

She is voiced by Sachika Misawa in Japanese and Monica Rial in English.

Not much is known about Chitaru's past. The only thing known about her past is that sometime long ago, she met her teacher's daughter but the daughter was eventually killed by Angel's Trumpet.

Chitaru has short red hair and red eyes. She wears a black coat with yellow outer lining with a white collar shirt. She has a tall stature and even older than a high school student. She looks like a prince instead of a young girl.

Chitaru is one of the most caring students from the Black Class, and is also one of the assassians who are complete opposite to the vile Otoya Takechi. She seems to actually care for others and would do anything to get revenge for the people she cares or cared for, as seen when she would risk her own life to transfer into the Black Class in order to look for an assassin who may have killed her former teacher's daughter.

As the culture festival begins, Chitaru mentions to Hitsugi about how she is searching for a killer known as Angel Trumpet who specializes in poison, to which Hitsugi offers to help her out.

The next day, as Shiena Kenmochi is transferred out of the Black Class due to her hospitalization, the play gets underway, with Tokaku and Haru discovering many of the prop swords have been covered in poison. Spotting this, Chitaru suspects that Haru is the Angel's Trumpet, the one who killed her teacher's daughter, and faces against Tokaku in an off-stage sword fight. During the battle, Hitsugi comes forward and confesses that she herself is the Angel's Trumpet, to Chitaru's great shock. Chitaru yields her battle after Hitsugi leaves.

Before her part of Romeo started, Chitaru decides to kill Hitsugi even knowing she was her best friend. During to the play, Hitsugi allows herself to be stabbed by Chitaru, who then learns from Nio that her wish was to leave with her once everything was over. Feeling remorse, Chitaru drinks the remainder of Hitsugi's poison, dying alongside her whilst the audience remain unaware.

In the finale, it is reaveled both Chitaru and Hitsugi survived their ordeals, but Chitaru is bedridden due to drinking the poison. Hitsugi tell her she can start rehab soon. She hasn't fully forgiven Hitsugi as she says she's incapable of saying those types of words.

Chitaru's Psychology can be described as both determined and conflicted, as her sole purpose for being in Class Black is to kill Angel's Trumpet who is responsible for the death of Chitaru's master, but her love for Hitsugi makes it difficult to kill her when she finds out she is Angel's Trumpet, although it did not stop her for doing so, she did no want live without her so she attempted suicide by poisoning herself with Hitsugi's poison. 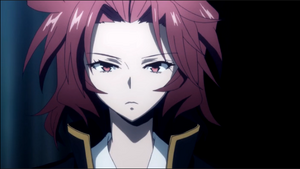 During the assassin meeting. 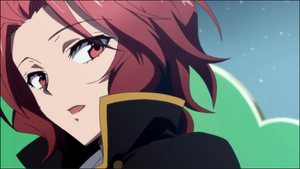 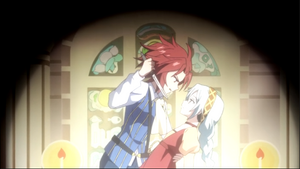 Chitaru before she stabbed Hitsugi. 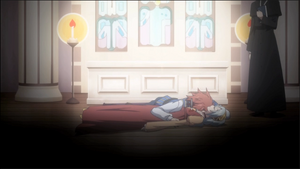