Help Thanos defeat the Avengers and their allies. (all failed)

The Chitauri are an evil extraterrestrial race of shapeshifting humanoids, and a villainous faction in the Marvel comics and a recurring antagonistic faction in the Marvel Cinematic Universe. They served as supporting antagonists in both the 2012 film The Avengers and the 2019 film Avengers: Endgame, and as posthumous antagonists in later parts of the Marvel Cinematic Universe. They serve as Loki's personal army and part of Thanos' army.

The race called Chitauri appeared as Ultimate Marvel's (Earth-1610's) counterpart to the Skrulls. They are a shapeshifting alien species who have attempted to conquer the Earth, most notably during World War II and again in the early 21st century.

The Chitauri claim to be part of "the immune system of the Universe", wiping out disorder and free will wherever they find it. They seem to prefer to act behind the scenes, mimicking and influencing the social and military methods of the species they are currently infiltrating. For example, they aided the Nazis in their attempt at world conquest by providing them with the technology to create a nuclear bomb carried by an intercontinental ballistic missile. However, this attempt was thwarted by the prototype super-soldier codenamed Captain America. Through the entire conflict of World War II, the Chitauri were being driven out of their operations in Africa and Europe, even from their main Japanese training camps in Hiroshima and Nagasaki. Following the end of the war, the Chitauri withdrew to make new plans.

The next attempt at conquest was more subtle (at first), involving long-term methods of manipulation such as will-inhibiting drugs in many nations' water supplies, influencing the media, and R.F.I.D. (radio-frequency identification) microchips to be implanted in schoolchildren, among other means. The Chitauri also infiltrated S.H.I.E.L.D., particularly the Psi-Division which could telepathically ferret out Chitauri agents. However, S.H.I.E.L.D. was able to detect some of the low-ranking "drone" staff of the aliens, disguised as common office workers, and wiped them out in an assault led by Black Widow and Hawkeye.

The Chitauri planted false information through the compromised Psi-Division that led S.H.I.E.L.D. and the Ultimates into a trap on a small Micronesian island; due to the combined efforts of Iron Man and Thor, the Ultimates, Nick Fury and a handful of SHIELD soldiers survived, but thousands of S.H.I.E.L.D. soldiers were killed and dozens of Helicarriers were destroyed.

The Chitauri then counterattacked by infiltrating the Triskelion and capturing The Wasp. The Chitauri leader, known only by his former Nazi identity as Herr Kleiser, took the Wasp to a hidden Chitauri base in Arizona. However, their location was given away when a fleet of damaged Chitauri starships suddenly entered Earth's atmosphere to hover above the formerly secret base, claiming that they were fleeing major defeats across the galaxy by their intergalactic enemies and that the remainder of their forces are forced to the "backwaters" of the Milky Way Galaxy (i.e. Earth's solar system). Disregarding Herr Kleiser's long efforts, the Chitauri ordered him to destroy Earth and its solar system with a doomsday bomb as part of a scorched-earth policy and retreat to the "lower fourth-dimension". The Ultimates and all available S.H.I.E.L.D. and military forces immediately converged on the alien fleet.

Although Iron Man and Thor were able to damage the ships (who as well in ridding the Chitauri bomb by teleporting it to the wastes of Nastrond, where its detonation caused only a small ripple in space-time), it was the Hulk who downed the majority of the fleet. At the same time, Captain America battled his old enemy Kleiser, but was unable to defeat him alone. At Captain America's urging/mocking of Kleiser touching Betty Ross (Hulk's crush), the Hulk was able to beat, dismember, and devour Kleiser. It is presently presumed that the combination of the Chitauri's series of intergalactic defeats and the destruction of the Chitauri fleet on Earth spelled the complete and total defeat of the alien race.

The Chitauri were able to mimic human form and absorb human knowledge, apparently by ingesting the bodies or brains of the humans they imitated. In their natural form, they appear to be large, and reptilian, but no clear images of their native form have been shown. Although the drone workers were nearly mindless and not much more durable than ordinary humans, the high-ranking officers such as Kleiser possessed enough strength to rival Captain America, superhuman stamina and durability, extremely rapid regeneration, and the ability to see or sense invisible objects or people. The Hulk proves to be strong enough to destroy and consume Kleiser.

Another race called Skrulls, physically resembling the Skrulls of the mainstream Marvel universe appear later (led by the billion-year-old Skrull Emperor, Kl'rt); these Skrulls dislike being confused with the Chitauri, whom they call terrorists. They have extremely advanced technology, but have not been observed to shapeshift. These Skrulls were seen only in an alternate timeline in which Reed Richards contacted their world via his teleporter. The events leading to that timeline were altered in Ultimate Fantastic Four #29 and contact was never made.

The Chitauri appear in the 2006 animated movies Ultimate Avengers and Ultimate Avengers 2 as the main antagonists and the enemies of the Avengers and S.H.I.E.L.D. Unlike their appearance in The Ultimates, they do show their true form: seven feet tall reptilian creatures with dark greenish skin, and fire blasts from their hands.

In the 2012 film The Avengers, the Chitauri are a race of grey-skinned, six-fingered reptilian humanoids that have a heavily cybernetic or biomechanical physiology. They are the secondary antagonists of the movie. These Chitauri display none of their shapeshifting capacities from the Ultimate universe, but have highly advanced technology, such as hovercraft-like skimmers, staves that also operate as rifles and large airborne troop carriers (known as Leviathans) that resemble biomechanical arthropods or limbless reptiles, encased in mechanized armor. They seem to have a neural link to their mothership as, when Tony Stark/Iron Man destroys the ship with a hijacked nuclear missile, the aliens seem to drop dead instantly.

They are thought to be led by one hooded Chitauri creature called "The Other" (played by Alexis Denisof). During the conversations had between the Other and Loki, the Other repeatedly mentions a powerful being later revealed in a mid-credits scene to be Thanos. 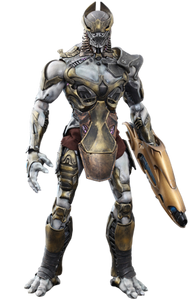 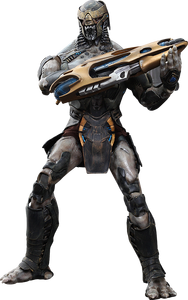 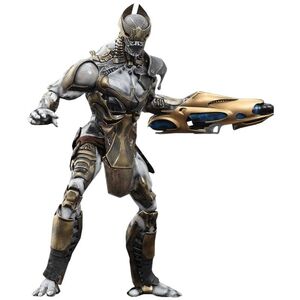 The Chitauri army arrives on Earth