Using her status to control others.
Idolizing Ladybug (formerly).

Win her mother's love. (both succeeded).
Get revenge on Ladybug and Cat Noir for forbidding her to be Queen Bee (failed).
Make her half-sister Zoé become a mean girl like herself (briefly succeeded, but ultimately failed)

Chloé Bourgeois (also known as Antibug, Queen Wasp, Miracle Queen, and Queen Banana in her Akumatized forms) is a major antagonist and on & off anti-heroine in the French superhero cartoon series Miraculous: Tales of Ladybug and Cat Noir.

She is a student in Miss Bustier's class at Collège Françoise Dupont, the daughter of André and Audrey Bourgeois, and the rival of Marinette Dupain-Cheng. Despite appearing as one of Ladybug's largest fans and allies (as Queen Bee) for most of the series, due to being continuously denied access to the Bee Miraculous by the former in addition to Hawk Moth's manipulation, she betrays Ladybug and Cat Noir and joins Hawk Moth due to resenting Ladybug for not giving her the Bee Miraculous anymore, thus becoming a villain in the finale of season 3, bent on getting revenge upon her and Cat Noir for rejecting her. Also, in "Rogercop", she wrongly accused Marinette Dupain-Cheng of stealing her bracelet, but Plagg had accidentally flown straight inside her back and gotten it stuck around himself.

She is voiced by Selah Victor in the English dubbed version, and by Marie Chevalot in the original French version of the show.

Chloé has fair skin, blue eyes and blonde hair with a ponytail at the back. She wears a yellow jacket over a white shirt, light pink lipstick, brown-lensed sunglasses atop her head, a necklace and white capris and shoes.

As Antibug, Chloé's hair and eye color remain the same, but she wears a black bodysuit with red spots and has a replica of Ladybug's yo-yo with with an inverted color scheme.

As Queen Bee, she wears a yellow and black striped costume and mask, and her ponytail has black streaks in it. She carries a yellow and white Trompo, which is her weapon, on her back.

As Queen Wasp, she has yellow skin, black hair, and purple eyes with cyan sclerae. Her outfit is identical to Queen Bee's, except with the color scheme inverted.

As Miracle Queen, she looks identical to Queen Wasp, only with the addition of a black crown on her head and black arm guards and shoulder pads, all of which have yellow lining.

As Queen Banana, she has yellow skin, yellow hair in a ponytail that is black at the tips, and red eyes. She wears a yellow-and-black bodysuit that flares outwards at the bottom (making it resemble a dress) and has a pointy collar and shoulder pads. She also wears a black, butterfly-shaped mask with yellow trim.

Throughout the show's first season, Chloé was portrayed as a stereotypical spoiled, egotistical and vindictive girl who bullied her classmates at Collége Francoise Dupont and loved to use her status as the daughter of the mayor of Paris to hold power over them and even the faculty. Her ego is so great that, when she first found the Bee Miraculous and became Queen Bee, she went as far as to cause a train accident so that she could stop it and be recognized as a hero for it. However, the Season 2 episodes "Zombizou" and "Despair Bear" showed that she did have a nicer side to her, as she apologized for her role in Miss Bustier's Akumatization and saved Ladybug from being killed by the titular Akumatized villain respectively, and from there on she began to slowly but surely become a better person, with Ladybug even allowing her to be her ally as Queen Bee.

However, Chloé goes back on her change of heart in the season 3 finale, where her growing resentment for Ladybug for not allowing her to be Queen Bee anymore because her secret identity being known by Hawk Moth would endanger her and her family leads to her being manipulated by Hawk Moth into joining his cause so she can have revenge on Ladybug, even willingly letting herself be Akumatized into Miracle Queen. After being de-Akumatized, Chloé shows no remorse for working with Hawk Moth and even tries to grab another Akuma released by him to re-Akumatize herself.

Because her father is the mayor of Paris, Chloé has learned to use cheating and manipulation for her own gain.

Antibug has powers that are identical to Ladybug's, but she summons more offensive objects than Ladybug's Lucky Charm does with "Anticharm", such as a giant sword.

Queen Wasp has control over a swarm of wasps that paralyze any person they sting and can also carry objects much heavier than themselves, including cars and Queen Wasp herself. However, just like normal wasps, the paralyzing wasps are unable to go into water.

Miracle Queen can teleport herself and others and has control over a swarm of wasps that bring any person they sting under her control. Like Queen Wasp's wasps, these wasps also can't go into water.

Queen Banana wields a banana-shaped pistol whose shots turn people they hit into bananas. She also rides a flying car equipped with cannons that have the same effect as her pistol. Due to possessing its amok, she has absolute control over a giant gorilla sentimonster, which she calls 'Banana Boom Boom'.

Chloé hates Marinette and will take any opportunity to treat her with cruelty or humiliate her. However, she was a big fan of her superhero alter-ego Ladybug until she grew to resent Ladybug for not allowing her to be Queen Bee anymore, to the point that she roleplayed as the heroine with her "friend" Sabrina playing Cat Noir on many occasions.

Chloé is Adrien's childhood friend and has a huge crush on him, referring to him affectionately as "Adrikins" and often trying to show him affection in a forceful manner and trying to get his attention, much to his dismay. Despite her crush on him, Chloé can still be rude to Adrien at times, such as forcefully snatching Alix's watch from his hands in "Timebreaker". She doesn't seem to be aware that Adrien only views her as a friend or that he's in love with Ladybug.

In "Despair Bear", Adrien threatens to end her friendship with Chloé if she does not start treating other people better, telling her that being nice "Isn't that hard", which inspired Chloé to try and be nicer for a time, until she finally ended her friendship with Adrien of her own accord in "Queen Banana".

Throughout Seasons 1 and 2, Gabriel doesn't interact with Chloé as Hawk Moth at all beyond Akumatizing her into Antibug and Queen Wasp, but she was a participant in Gabriel's hat designing contest in "Mr. Pigeon".

However, in the Season 3 episode "Miraculer", Hawk Moth begins actively trying to lure Chloé over to his side by playing to her growing resentment for Ladybug for forbidding her from being Queen Bee anymore, which eventually works in "Heart Hunter", leading to Chloé betraying Ladybug, Cat Noir, and the other superheroes.

Zoé is Chloé's half-sister who lives in New York. In "Sole Crusher", Chloé insults tries to teach Zoé to become a mean girl like herself so she can actually consider her a sister, even though Zoé herself does not actually want to act like that and only does so for the sake of gaining Chloé's approval. Eventually, the sadness of having to give up her sneakers (which have a message from the only friend she had back in New York written on them) makes her vulnerable to being Akumatized into the episode's titular supervillainsess, and she uses her new powers to kill Chloé (altough she's brought back by Ladybug's power after Zoé's de-Akumatization). Afterwards, Chloé expresses anger at seeing Zoé acting nice to Marinette and her friends.

While Chloe is unaware that the superhero Vesperia is actually Zoe, she can't help but harboring a deep hatred and jealousy towards her, with the sole reason being that Vesperia is using the Bee Miraculous, as well as calling her an imposter version of Queen Bee. 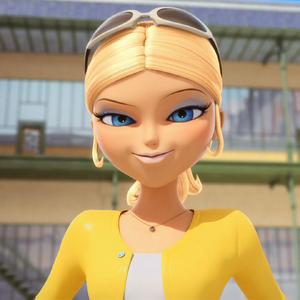 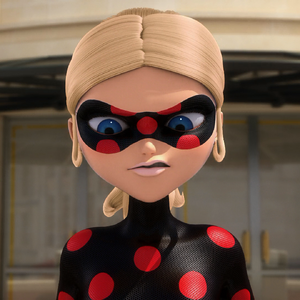 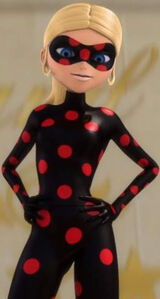 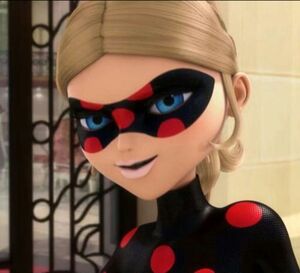 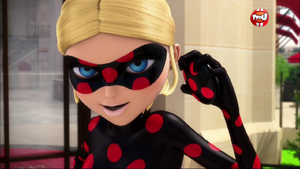 Antibug attacking with her yo-yo. 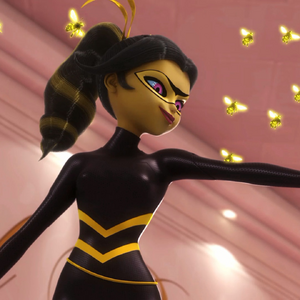 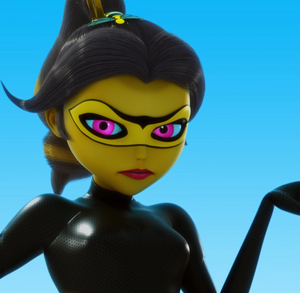 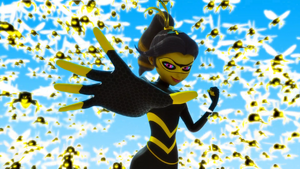 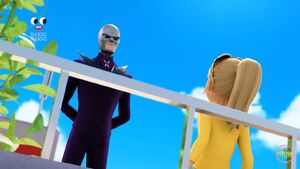 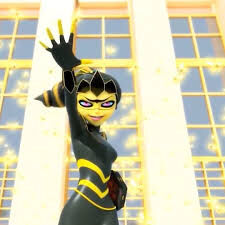 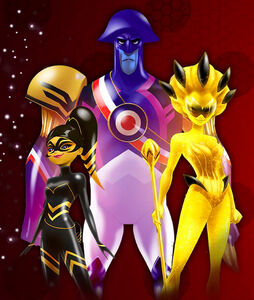 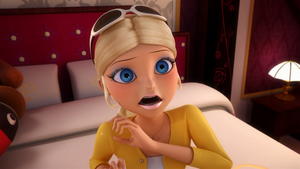 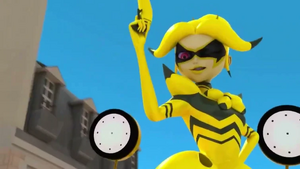