Kidnap her son, Declan, to punish his father for torturing her (succeeded).

Chloe Donaghy is the main antagonist of the Criminal Minds episode "It Takes a Village". She is a drug trafficker and pimp who kidnaps her son, Declan, to get back at his father, Ian Doyle.

She was portrayed by Ursula Brooks.

Donaghy trafficked drugs and prostitutes in her native Ireland. She was arrested by Interpol, but served only three years in prison thanks to the influence of her many wealthy contacts, who pulled strings to get her leniency so she would not expose them.

In the mid-1990s, she had a relationship with IRA terrorist Ian Doyle, who got her pregnant. Donaghy had no desire to be a mother, however, so she tried to abort the pregnancy with pills. Doyle caught her in the act, however, and forced her to vomit the pills back up. Enraged that she had tried to abort their child, Doyle punished her by keeping her chained to a bed for seven months. When she went into labor, Doyle had Louise Thatcher, the nanny he hired to care for his child, act as a midwife. After Donaghy gave birth to Declan, Doyle paid her to stay out of the boy's life. Nevertheless, she hated Doyle for forcing her to bear a child, and bided her time until she saw an opportunity for revenge.

Years later, undercover Interpol agent Emily Prentiss arrested Doyle and faked Declan's death so he could have a normal life. As Doyle believed Declan was dead, Donaghy presumably thought so, as well. However, Doyle eventually learned the truth after torturing Prentiss, now with the FBI's Behavioral Analysis Unit (BAU), and Donaghy started keeping tabs on him as he searched for Declan so she could kill him and take back their son. However, unlike Doyle, who, for all his faults, genuinely loved Declan, Donaghy intended to sell him on the black market, considering her own child nothing more than merchandise.

"It Takes a Village"

To enact her revenge against Doyle, Donaghy partners with Irish gangster Lachlan McDermott, who also hates Doyle for killing his brother. She donates cupcakes to Declan's school that contain just enough poison to make the children sick so they would be sent home; she then follows Declan as Thatcher takes him to her house. Donaghy and low-level gangster Richard Gerace break in, kill Thatcher and two FBI agents, and kidnap Declan. Donaghy then kills Gerace, who has served his purpose.

Donaghy meets with McDermott on the latter's private jet, with Declan bound and gagged onboard. Before they can take off, however, the BAU, led by Prentiss, show up on the tarmac with a captured Doyle in tow, offering to trade Doyle for Declan. Unwilling to give up her son, Donaghy tries to overpower McDermott, but he shoots her in the chest and takes Declan out to trade for Doyle. Though badly wounded, Donaghy manages to limp out onto the tarmac and fatally shoots both Doyle and McDermott, forcing BAU agent Spencer Reid to shoot her dead. 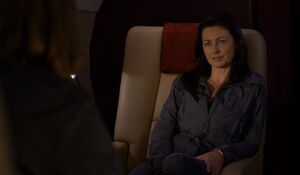