Chloe Spade is the secondary villainess from the 2016 Lifetime movie, Nightmare Nurse.

She was portrayed by Lindsay Hartley.

Chloe Spade is an in-home nurse sent to the home of protagonists, Lance and Brooke, after the couple was in a car accident that killed a man named Darren Wells, and left Lance with a broken leg. During her time at the home, Chloe develops romantic feelings for Lance, and has even resorted to coming on to him and trying to kiss him. She is later shown on her laptop looking at photos of Lance and Brooke together, and also looking up information on overdoses on Oxycodone, which later happens to Lance.

At the hospital, Lance tells Brooke that Chloe had been making passes at him, which leads Brooke to call the police, believing that Chloe drugged Lance. It is later revealed that Chloe has a dark history; she is a manic-depressive on medication. Also, Chloe developed romantic feelings for a married man when she cared for him in Brentwood, and when he didn't reciprocate, she trashed his place. Chloe attempted to visit Lance at the hospital, with flowers, but she is stopped by Brooke, which led to a verbal confrontation. She later hears the couple's conversation with their lawyer friend, Gwen, while attempting to visit Lance again. After hearing that they plan to take her down, Chloe confronts Gwen and attacks her, leaving her in a coma. Chloe visits the home again, pleading her case and stating that she didn't drug Lance, only for Barbara Stone, who replaced Chloe, to keep her from entering.

Chloe is later found unconscious at her home by police; she attempted suicide via an overdose of Oxycodone. She is at the hospital assumingly cared for by Barb, who later drugs Chloe and renders her unconscious. Chloe was revealed to be paid off by Barb to ruin the lives of Lance and Brooke, as it was later revealed that Darren Wells was Barb's fiancee. Chloe is placed in the trunk of Barb's car, but she later gets out and points a gun at Barb, who is in the couple's home attempting to kill them. Chloe ends up further drugged by Barb, though her true fate is never revealed. 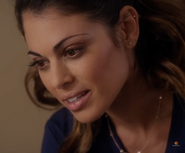 Add a photo to this gallery
Retrieved from "https://villains.fandom.com/wiki/Chloe_Spade?oldid=3767169"
Community content is available under CC-BY-SA unless otherwise noted.