Aid Baraggan in his service to Aizen and his goals.

Choe Neng Poww is one of the Fracción of Baraggan Louisenbairn and an antagonist from Bleach.

He was voiced by Hiroshi Shirokuma in the Japanese version, and by Jamieson Price in the English version.

Poww, along with his fellow Fracción, Baraggan, Coyote Starrk, Lilynette Gingerbuck, Tier Harribel, and her Fracción were summoned to the fake version of Karakura Town by Aizen, after he was confronted by the forces of the Soul Society. After Aizen, along with Gin Ichimaru and Kaname Tōsen, were trapped by a fire prison generated by Captain-Commander Yamamoto’s Zanpakuto, Baraggan took command. Poww, with help from Ggio Vega and Abirama Redder, pulled out a throne made of a bone for their master to sit on. When Baraggan found out that the real Karakura Town was being held in the Soul Society by pillars, he at first sent four large Hollows to destroy them. However they were slain by the Shinigami guarding them so Baraggan sent Poww, along with other members of his Fracción, Abirama, Findorr Calius, and Charlotte Chuhlhourne to attack them. Poww confronted Ikkaku Madarame, who noted his size and said he’d better pray he didn’t get cut down quickly. This prompted the Arrancar to ask if Shinigami had a god and the Shinigami admitted they didn’t really have one they prayed to. Ikkaku then said he’d just pray to Poww’s god, which he said was fine since his lord Baraggan, who was akin to a god, knew better than anyone else he’d win. The Arrancar fought Ikkaku and won, being the only one of Baraggan’s Fracción to do so, then destroyed the pillar. Poww, assuming the Shinigami was dead, wondered if he’d had any hidden strengths left to show him. The Arrancar was surprised when Ikkaku got back to his feet then demanded he show him any hidden strengths he had or die. The Shinigami denied that he had any so Poww was about to finish him off, but before he could, the 7th Division captain, Sajin Komamura, punched him into a wall. The Arrancar recovered and noted he’d felt that punch, while mocking the captain for his dog head. Poww proceeded to punch Komamura in the stomach with a “real punch”, a blow so powerful it sent him flying away. The Arrancar then released his Zanpakuto and noted the form had made him heavy and tried, but said Baraggan gave him a command. Poww then chased after the 7th Division lieutenant, Tetsuzaemon Iba, who was trying to get Ikkaku to safety, trying to crush them two. However Komamura blocked the Arrancar’s fist, then threw him over his head to slam him into the ground. Poww was unharmed and said that the captain had surprised him, enough for him to yawn. But the Arrancar opening his mouth was just preparation for him firing his Cero, but Komamura released his Bankai, allowing him to deflect it. Poww punched at it only for the Bankai to block each strike, then countered with its own punch. The Arrancar grappled with it and tried to fire another Cero at it, but the Bankai forced the blast down his throat. Poww fell to his knees, shocked, then asked Komamura who he was and he revealed his identity. He then slew the Arrancar with his Bankai’s enormous sword.

Poww rarely speaks and is normally very calm, observing, and stern, but he can also be arrogant and overconfident. This is seen when Komamura smashing him into the ground made him just boastingly laugh. Poww also has a habit of insulting people’s appearance, noting Ikkau’s baldness and mocking Komamura’s dog head. Like his fellow Fracción, Poww has a great deal of respect for Baraggan, thinking of him as his god and prays to him before he fights.

Poww has considerable spiritual power, as well as a great deal of physical strength, able to send Komamura a large distance with one punch. He can use Híerro, an Arrancar technique that hardens the users skin to protect them, and a Cero, a powerful energy blast he fires from his mouth. Like all Arrancar, Poww can enter Resurrección form by releasing his Zanpakuto, Calderón, with the release command, “Breath”. When he does so, he is changed into a gigantic form with even greater strength and power than he had before. However this form's great bulk appears to tire Poww out quickly and he states he doesn't like using it, unless Baraggan has given him a command that requires him to. 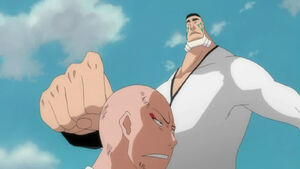 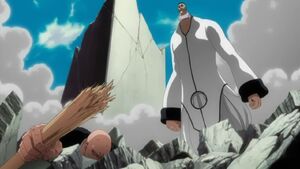 Poww standing over a defeated Ikkaku. 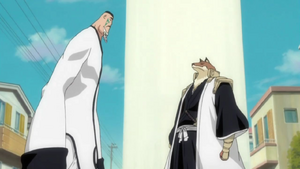 Poww facing off against Komamura. 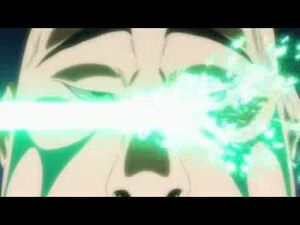 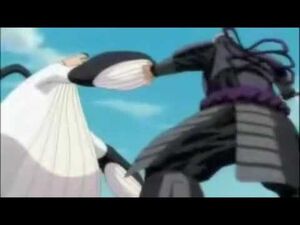 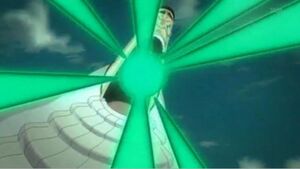 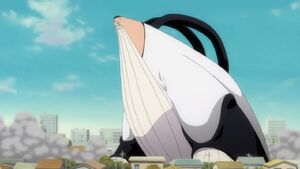