Take over Little Haiti and crush all their rival gangs. (failed)

The Cholos are a criminal group of Mexican gangbangers and antagonists in GTA:Vice City Stories. They are the sworn enemies of the Los Cabrones and reside in Little Haiti. Victor Vance encountered them when he stopped them from wrecking a store under Marty Jay Williams's protection. They also at war with the Los Cabrones and attack their businesses. The Cholos wear gray headbands, white tank tops, chino trousers and dickies pants.

Their dominance over Little Havana begins to be threatened in 1984, when the Cubans arrive on the scene, sparking a deadly turf war for control of the neighborhood. They were later wreaking havoc in the streets of Little Havana, but failed thanks to Victor Vance. Next, they attempted to kill Umberto's father but failed. In revenge, Robina decides to launch an all-out attack on the Cholos that results in the Cholos' defeat.

The gang eventually dissolved when Victor Vance and some members of the Los Cabrones planted a bomb in the Cholos warehouse, wiping out the gang for good.

After the Cubans with the help of Victor Vance win the turf war for Little Havana, the Cholos can still be seen driving in Little Haiti and their businesses would be either up for sale, damaged or seized by the Bikers. After their defeat, they can still be seen occasionally driving or walking around Little Haiti. As of 1986, the Haitians are in control of Little Haiti, which indicate that the Cholos were completely wiped out. 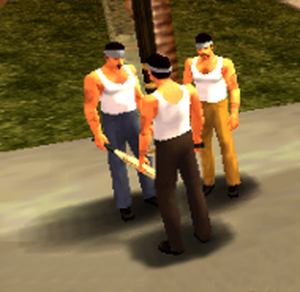 Retrieved from "https://villains.fandom.com/wiki/Cholos?oldid=4043182"
Community content is available under CC-BY-SA unless otherwise noted.