Hypocritical Racist
Choni Moreno is a recurring character and occasional antagonist/anti-villain from The Cleveland Show. She is the aunt of Junior's girlfriend, Cecelia, and across-the-street neighbor of The Brown-Tubbs Family. Choni is shown to be very controlling and unforgiving, and has even exhibited racist views on black people in her second appearance, believing them all to look the same. The only person she has any real beef with is Cleveland, being friends with all of his neighbors and even family, allowing for her to turn them against him.

She was voiced by Rosie Perez.

In "Y Tu Junior Tambien", she first started to hate Cleveland, when she heard about him getting her family deported and accused him of being racist (which would be proven hypocritical later), but thanks to Junior marrying CeCelia, she got a green card, and so they were allowed back into America again. It was revealed later that Lester was the one, who got her family deported. Choni still hated Cleveland and wanted to distance herself from him as much as possible. This of course, was not going to be feasible, since her neice was very much in love with his son and they were bound to meet up again eventually.

In "There Goes El Neighborhood", they met again sooner then expected, a mere one episode later, when the Moreno family moved into the house across the street from the Brown-Tubbs'. Choni had forgotten her keys one night and tried getting into her new house through the window. Cleveland saw this in the dark of the night and thought someone was trying to break in. He called the cops on her, but when finding out the truth, Choni assumed Cleveland did this out of racism, despite Cleveland having no knowledge of her race, since it was so dark. No matter how much he explained it, Choni continued to hate and make fun of Cleveland and would later even turn his friends, family, and neighbors against him, when she threw a Superbowl party at her house, that was way better than thr one he thre at his own. This brought Cleveland into hating her, starting a bitter rivalry, that Donna wanted to put a stop to. She convinced both of them to try and become friends, and Choni gave him a chance. She trusted him to babysit her son, Marco for him, but Cleveland ended up returning to her house with the wrong child. Choni accused him of racism again, since this other child was also Mexican. The two of them were forced to work together to find Marco again, and when they did, it turned out Marco was also responsible for the mistake, as he happened to mistake another black man for Cleveland, and even revealed that Choni had been forcing the "all back people look the same" stereotype onto him. The two of them realized they were both a little bit racially insensitive, but that was not the reason they did not like each other. It was simply because of the ill will that they had. They put their differences aside and became friends after this.

In "Fist and the Furious", Choni opened up a taco truck on the same street Junior and Rallo opened a sandwich truck and stole all their customers. Rallo vowed revenge and planted live bugs in all of her ingredients, unbeknownst to her. She would serve these to her customers and get her food truck shut down by the health department. Junior convinced Rallo he had taken it too far with the revenge and they made it up to her by figuring out a way to freeze bugs and made them edible, getting her taco truck opened for business again.

Choni Moreno is a Hispanic adult woman with dark brunette hair. Choni usually wears a white dress with a red band around the waist and red high heels. She wears yellow ring earrings, a yellow necklace with a green gem in it, and two bracelets. One is yellow and the other is green. Choni also wears red lipstick.

Choni Moreno is an archetypical spicy Latina, with a crass and brazen demeanor. She is very proud of her Mexican culture and lays it down very heavily, whenever she gets the chance. Choni is very snappish and quick to anger, whenever she feels she has been wronged and is never afraid to accuse someone of wrongdoing, even when she's completely wrong. She has no problem with making a huge public scene out of minor dilemmas and feels no shame in making herself the center of attention when lashing out at someone else. In fact, she insists on it, as she enjoys getting the attention when she tries to show someone else up.

One thing that Choni usually accuses people of is racism against her heritage. In "Y Tu Junior Tambien", she assumed that Cleveland got her family deported and publicly accused him of racism in front of everybody when in actuality, it was Lester who had them deported and Cleveland had nothing to do with it. In "There Goes El Neighborhood", she accused Cleveland of racism again, for calling the cops on her when he saw her breaking into her own house at night, saying that the only reason he thought she was a criminal was that she was Latina. Choni failed to acknowledge the fact that it was too dark for Cleveland to even tell what her race is. Later on, in the same episode, Choni was exposed as a hypocritical bigot, when her son, Marco, let it slide that Choni is always saying that black people all look the same in front of him, which not only showed up Choni for her hypocrisy and racism, but also for the way she indoctrinates her child with her twisted world views.

Choni is egotistical and wants to be somewhat of a "neighborhood celebrity" of Grace Street. She talks very loudly and feels the need to announce everything she does. She goes all-out with hosting elaborate parties at her house, such as her massive Superbowl party, which she partly threw for the joy of spiting Cleveland, as she knew he was also hosting a Superbowl party at his house. In "Fist and the Furious", Choni drove her food truck right up to where she knew Junior and Rallo had their food truck set up and stole all their customers. 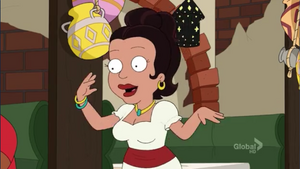 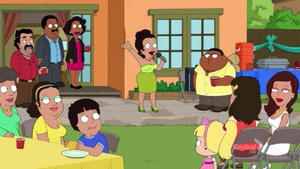 Choni makes herself the center of attention. 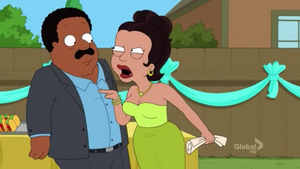 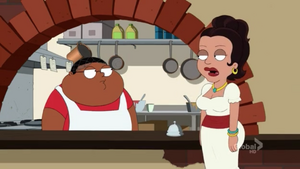 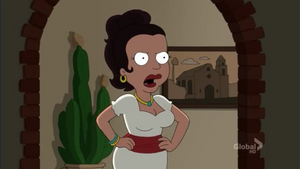 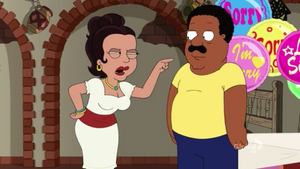 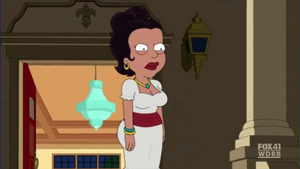 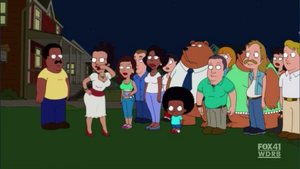 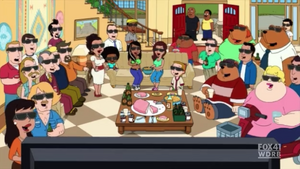 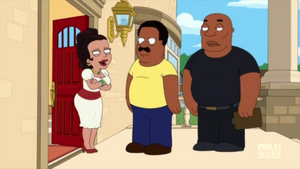 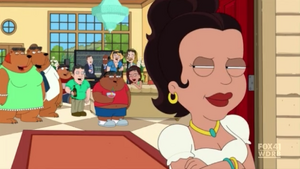 Choni gets all of Cleveland's friends to mock him. 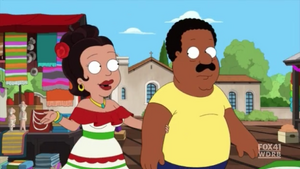 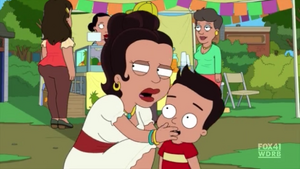 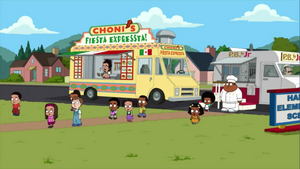 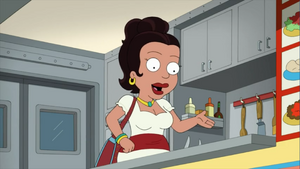 Choni refuses to shut down her business. 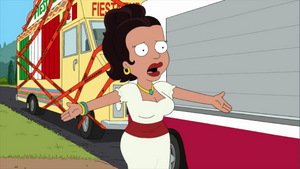 Choni's good truck is shut down by the health department. 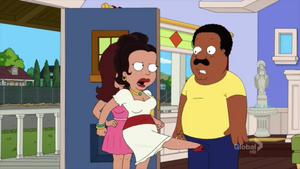 Choni kicks Cleveland in the balls. 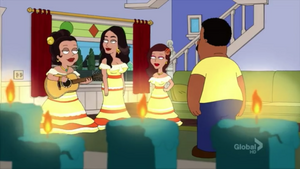 Choni and her family once again serenading Cleveland, to teach him about her culture.

Choni, portrayed by a celebrity impersonator.

Choni's cameo in the Family Guy episode, "No Giggity, No Doubt".