Picking at the metal plate in his head with a coat hanger.

Eating human flesh.
Carrying around Nubbins like a puppet.

Paul "Chop Top" Sawyer is the older brother of Leatherface, younger brother of Drayton, and twin of Nubbins. He is the secondary antagonist in Texas Chainsaw Massacre 2.

He was portrayed by Bill Moseley, who also portrayed Luigi Largo in Repo! The Genetic Opera and Otis B. Driftwood in House of 1,000 Corpses and The Devil's Rejects.

During the events of the first film, Chop Top was serving as an officer at Vietnam. During his time there, he took a machete to his head by a Vietnamese soldier but survived.

Chop Top first appears alongside Leatherface in a pick up truck. Together they attack a pair of drunk motorists who are in a smaller car on a bridge. Chop Top and Leatherface kill the two men, not realizing that their attack on the drivers was being recorded at a radio station the two drunken men had called using a car phone prior to the attack. When DJ Vanita "Stretch" Brock plays the recording of Chop Top and Leatherface's attack on the drivers over the radio, the two brothers break into the radio station with the intention of killing Vanita, but the brothers' plan is not carried out. Leatherface, having become infatuated with Vanita, tricks Chop Top into believing he has killed her. When the two leave the station they take an injured co-worker of Vanita's with them.

When Chop Top and brother Drayton discover that Vanita is still alive after finding her in the Sawyer family's home in an abandoned amusement park called the Texas Battle Land, which Chop Top bought using government checks, the brothers hold her captive and decide to let the decrepit patriarch of the Sawyer family, Grandpa (Ken Evert), kill her with Chop Top's help. Vanita is saved when protagonist Lieutenant "Lefty" Enright arrives and engages Leatherface in a chainsaw duel. The battle between the Sawyers and Lefty reaches a climax when a hand grenade, accidentally set off by Drayton, explodes and kills Grandpa, Lefty, Drayton and Leatherface, as well as presumably destroying the puppet-like corpse of Nubbins Sawyer.

Narrowly escaping the grenade explosion, Chop Top follows Vanita to the top of the Matterhorn attraction in the Texas Battle Land, which the Sawyers converted into a shrine known as "Chainsaw Heaven". Slashing Vanita and himself several times with a straight razor, Chop Top apparently meets his end when Vanita stumbles upon the mummified corpse of Great-Grandma Sawyer and tears a chainsaw out of the corpse's abdomen. In the ensuing struggle, Chop Top is wounded in the belly by the chainsaw and sent plummeting into the ruins of Texas Battle Land. 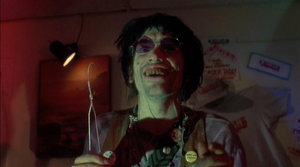 Retrieved from "https://villains.fandom.com/wiki/Chop_Top_Sawyer?oldid=4216056"
Community content is available under CC-BY-SA unless otherwise noted.