Serial killer
Head of the Subordinates

Hunt down and kill Alyssa (failed).

Harold Powell also known as Chopper, is a supporting antagonist in the survival horror game Clock Tower 3. He is the third Stalker and the Head of the Subordinates.

He was voiced by Mike Hayley in the English version and voiced by Yoshinori Okamoto in the Japanese version.

Harold was born in 1655 in Cardiff with the name Harold Powell. At some point, he became a woodcutter, but hid his appearance due to being deformed at birth. This results in him being laughed at, ridiculed, taunted and bullied by others his entire life.

At the age of 17, Harold fell in love with the local innkeeper's daughter, Emily Dickins, and wanted to marry her. But was rejected by her due to his deformity. This caused him to murder Emily with an axe and became a serial killer, abducting and murdering women in other villages. The villagers caught him and sentenced him to 921 years.

Harold was later revived and possessed by an unknown Entity to hunt and kill Rooders and the head of the Subordinates.

After defeating Corroder, The Dark Gentleman appears and throws Alyssa into a sewer-like workplace. There, the third Stalker shows up, known as the Chopper. He tells Alyssa she is going to die by his hands, before blocking her path and starts chasing her.

When Alyssa gets through the door that leads her to the storage room, she finds herself back in time to when she was a baby. Witnessing the murder of her father by her "beloved" grandfather's hands, Chopper corners Alyssa and cruelly taunts her. After the battle, Chopper claims she would suffer like all the rest, before walking away laughing.

After retrieving the Old Rooder Arrow, Chopper launches an attack on her, but much more powerful this time. After Alyssa defeats Chopper, standing for a moment, his body is utterly destroyed, thus averaging the Rooders he killed.

Chopper is later seen with the other Subordinates chanting, as Dick Hamilton was proceeding with the Ritual of Engagement. He then disappears along with the Subordinates when Alyssa uses her Clover Necklace against Lord Burroughs. 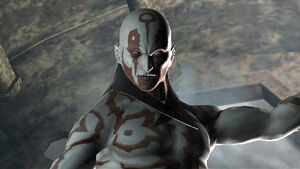 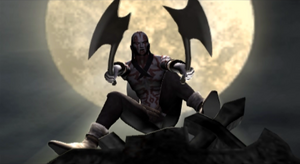 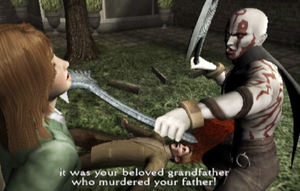 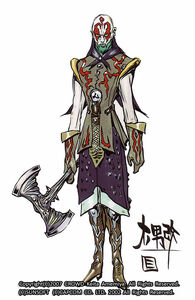 Concept Art.
Add a photo to this gallery

Retrieved from "https://villains.fandom.com/wiki/Chopper?oldid=3803251"
Community content is available under CC-BY-SA unless otherwise noted.