Assisting Di for her work.

Chris is a major antagonist in Big Hero 6 The Series; specifically, he is the secondary antagonist in the first half of Season 2. He served as an assistant of Diane Amara, who was created by her to take part in her schemes.

He was voiced by Ben Feldman.

Chris appears to be friendly and helpful in the public, however, he is serious when helping Di for her plans. When working with her, he always acts like a pet to her, as shown when he accepts treats from her for good behavior.

In Internabout, he is first seen with Diane Amara as her assistant when the Big Hero 6 visited Sycorax. He gave the SFIT student's ID cards, gaining interest with Wasabi, along with his culinary skills.

In Prey Date, Chris is seen serving food inside Mrs. Frederickson's home. The next day, he informed Di that Karmi wanted to see her. Later, he can be seen serving Di and a scientist refreshments during lunch. After a mutated Orso Knox escaped from a containment, he reported Di and Fred about the circumstance and accompanies his boss as she leaves to gain access to breach the ensuing lock-down procedure from her executive team. Later, he popped up and told Wasabi he can go ahead and slice the door.

In Nega-Globby, he sneaked into the lab of SFIT and stole a sample of Globby's DNA from Honey Lemon's testing so that Di can examine and perform tests the sample, leading to the creation of their own glob-like creature. When he came to feed it, it attacked him. He reported to her that the slime escaped, which she let it cause havoc in the city.

In Muira-horror, he along with Di encountered Alistair Krei and Hiro, who mentioned about a meteoroid disabling people's technology when they go in the woods and Ned Ludd is protecting it. They headed back to the lab and bring a special containment and a transdermal patch. As Di distracting Ned, Chris ambushed him and used his stealth and skills to knock him out, allowing her to put the patch on him. They went to his tree house and successfully captured Bessie, as well as mutating Ned into the Hibagon.

In Something Fluffy, Chris was adored by the Mayoi in the lab. Later, when the Mayois enlarged their size, and the city, Di along with him and Karmi helped the Big Hero 6 restored them to their infantile state and defeated the mutated Mr. Sparkles.

In Lie Detector, he served Di gold-flaked muffins, which she said gold is what she needs for the subject. Later, he tries to calm a frustrated her down after her initial attempt to acquire gold through her mutated henchmen is thwarted by Big Hero 6, then watches as her plans to make use of energy from Bessie. She later gives Chris an assignment before leaving on her meeting, and Chris heads into the woods that evening to lure a bear out with honey. After struggling with the animal, Chris manages to acquire its fur and bring it to Sycorax, where he and Di fuse Bessie with bear DNA to create a bear-like rock monster.

In City of Monsters: Part 1, he can be seen with Diane in her lab playing with his toy like a dog, and after that she commanded him to get Wendy Wower by using the monsters, which was failed by the Big Hero 6. Back at Sycorax, Chris is present while Di dismissing her henchmen before Karmi see them. Both of them can be seen at SFIT before mutating Karmi into a monster.

In the second part, when the Big Hero 6 entered Sycorax, Chris served them cupcakes and told them the monsters are outbreaking the city, which easily lure them away from Hiro and Baymax. Chris can be seen beneath Sycorax with Di, as she revealed her real name, Diane Amara. After Hiro asked Di to stop the monsters and Karmi, she refused and tried to mutates Hiro instead. Before he could make a run, Chris hold some beef rum and prevent him from escaping. Di used Karmi to attack Hiro, while Baymax tried to reach her phone which was being tossed away, but before he could reach it, he increased his size and stomped him and made him malfunctioned. Chris later stayed behind Di, until Hiro convinced the mutated Karmi turned on her instead. But before she could attack Di, Chris managed to defeat her and tossed Hiro to Di. However, she can not find her phone, and the real Liv Amara decreased his strength and weakened him, which allowed Karmi to attack him. Later, both Chris and Di were arrested for their crimes. 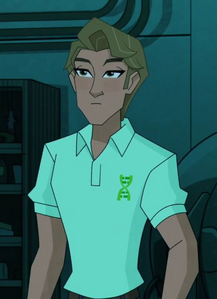 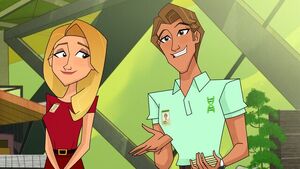 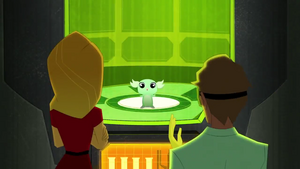 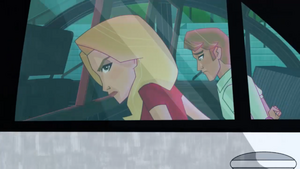 Diane was arrested along with Chris, he revealed by Liv