Abusing his wife and daughter.

Keep his habits a secret and to dominate the Woman.

Christopher "Chris" Cleek is the main antagonist of the 2011 novel The Woman by Jack Ketchum, and its film adaptation of the same name in the same year.

In the film adaptation, he was portrayed by Sean Bridgers, who also played Old Nick in Room, and Tommy Cole in The Best of Me.

Cleek was a country lawyer who, while out hunting in the woods, encountered the titular feral woman, thus becoming smitten by her. He later returned to the woods that day, and he kidnaps and traps the Woman in his fruit cellar. When the Woman bit the tip of his ring finger off, he violently beat her, and decided that he would civilize her. He appoints his family to help him with his experiment, but in reality, Cleek really only wants to freely molest and dominate the Woman under the guise of civilizing her. The novel goes further by revealing that Cleek was actually a misogynist as well as a domestic abuser who took great pleasure in dominating his wife Belle, as well as in torturing the feral woman through such means such as dosing the Woman in boiling water, and using a high pressure power washer on her as a means of trying to reestablish his dominance over her. Not only this, but it's revealed that Peggy was pregnant with his baby, which resulted from him raping her each night. The film subtly alludes to this when Chris places a candle by Peggy in a similar fashion to the feral woman.

Miss Raton, Peggy's teacher, took notice of Peggy's frequent visits to the restroom, and she decides to consult her parents about the dilemma. Fearing that she might ruin his public image, Chris hits her over the head, ties her up, and takes her to the barn so that she could be fed to his dogs. It was also revealed that Cleek had another daughter (who suffered from anophthalmia) imprisoned in the barn, and she ate the woman as well. Eventually, Peggy releases the Woman from her bindings, and she slaughters Belle and Brian before killing Chris by ripping out his bladder. Peggy, Darleen, and their eyeless sister (who's dubbed Socket in the film) leave into the woods with the Woman.

Cleek portrays himself as an affable figure while in public, but that is all to hide how utterly evil he is. His most defining trait is his hatred for women citing that the only thing women were good at was sex, and that they should all be in a similar position as the feral woman. He thinks so highly of being a male, that he actually covers for his son, Brian, when Brian attempted to have his way with the Woman. He also believes that, since, he was a male, he was entitled to do whatever he wanted, consequences be damned. 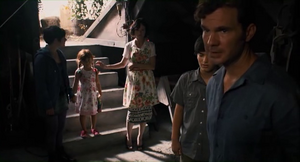 Cleek introducing his family to the Woman. 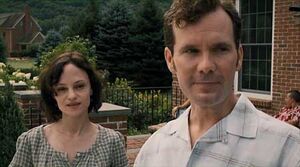 Chris with his wife. 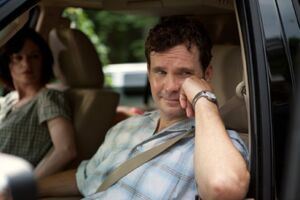 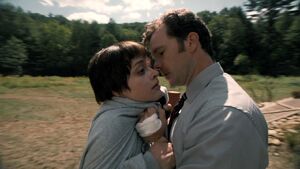 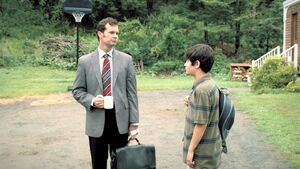 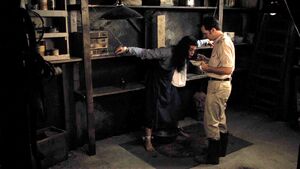 Cleek with the Woman.
Add a photo to this gallery

Retrieved from "https://villains.fandom.com/wiki/Chris_Cleek?oldid=4202927"
Community content is available under CC-BY-SA unless otherwise noted.