In 1996, Jericho had a brief run in ECW, where he would capture the ECW Television Championship before departing for WCW. There he would capture the Cruiserweight Championship from Syxx on June 28, 1997. He would lose the title 30 days later to Alex Wright, and win it back a little over two weeks later. He held the title for little more than a month before dropping it again to future legend Eddie Guerrero.

He would later regained the title in early 1998 from Rey Mysterio to become a three time Cruiserweight Champion, and would go on to reign for 113 days before losing the strap to Dean Malenko. After the title was vacated, Jericho won it for his fourth and final time in a tournament. 55 days later, he dropped it to Juventud Guerrera. In late 1998 he claimed the World Television Championship from Stevie Ray and retain the title for 112 days before being defeated for it by Konnan. Shortly after, he left for the WWE.

Jericho made his WWF debut during a segment featuring the Rock and Big Show, under the gimmick Y2J. His first feud would be against Chyna for the Intercontinental Championship. He defeated her for the title at Armageddon, and co-owned it with her after a match between the two ended in a double pin. He would defeat Chyna and Hardcore Holly at the Royal Rumble to become the soul owner of the belt, and technically begin his second run with the title. He would lose it a month later to Kurt Angle at No Way Out. A month after WrestleMania 16, he would win the title a third time on SmackDown! from Chris Benoit, only to lose it to him less than a week later. At the 2001 edition of the Royal Rumble, he would win  his fourth Intercontinental Championship from Benoit and retain it for 72 days before Triple H won it from him.

Later that year, he bested the Rock for the WCW World Championship at No Mercy in October. The Rock reclaimed the gold less than a month later. On December 9, 2002 at Vengeance, he won the World Championship a second time from the Rock, and later that same night, defeated Stone Cold Steve Austin for the WWF Championship, unifying both titles to become the first Undisputed WWF Champion. He would retain the Undisputed title against the Rock at the Royal Rumble, and against Steve Austin at No Way Out, before dropping the title to Triple H at WrestleMania 18.

Afterwards he defeated Rob Van Dam to win his fifth Intercontinental title. Two weeks later, he lost the belt to Kane. The following month, he once again beat Rob Van Dam for the title before losing it to Van Dam that same night on Raw. Nearly a year later, he became a record breaking seven time Intercontinental Champion by defeating Christian in a ladder match for the vacant title. A month later, he dropped the belt to Shelton Benjamin. The next year at WrestleMania, he competed in the first ever Money in the Bank Ladder Match, a concept he created, though he would be unsuccessful at winning the contract. Following a feud with John Cena for the WWE Championship, his contract expired and he left the WWE in 2005.

Jericho returned to the WWE in late 2007, later claiming his eighth Intercontinental Championship from Jeff Hardy, breaking his own record for the most Intercontinental Championship titles. in June 2008, Jericho turned heel on Shawn Michaels because HBK lied to Jericho about being injured during a match that Jericho was the special guest referee at. after his turn, he took Lance Cade as a protege. after his heel turn, Jericho developed a suit-wearing "self righteous honest man" gimmick inspired by Anton Chigurh (Javier Bardem) from the film known as "No Country for Old Men". a gimmick where he started referring to everyone as "Hypocrites" or "Parasites". Jericho would also refer to himself as "the best in the world at what he does". as a result of the heel turn, Jericho would intentionally remove the trademarks associated with the Y2J gimmick. removing the characteristics that made him popular. He lost the title 111 days later to Kofi Kingston at Night of Champions on June 29, 2008. In September of that same year, he claimed his first WWE World Heavyweight Championship in a five man match after replacing CM Punk, the former champion, who was stripped of the title after an injury sustained from Randy Orton. Batista would defeat him for the championship less than a month and a half later at Cyber Sunday.

In June 2009, Jericho would become a nine time Intercontinental Champion after defeating Rey Mysterio in a No Holds Barred match, breaking his own record a second time for most Intercontintntal title runs. However, he lost the prestigious title three weeks later to Mysterio.

Jericho would start 2010 by winning his third World Heavyweight Championship from the Undertaker in an Elimination Chamber match, and would retain the title against Edge at WrestleMania 26. Two days later, Jack Swagger cashed in his Money in the Bank Contract to defeat a wounded Jericho for the title. Swagger would retain the championship in a Triple Threat match against Edge and Jericho on SmackDown!, and Jericho would later lose to Edge in a Steel Cage match at Extreme Rules to end their feud. In September of that year, he once again departed the WWE.

In January 2012, Jericho returned to the WWE in order to try and claim the WWE Championship. however, Jericho

would troll the fans weeks prior to the Royal Rumble. He entered the 25th edition of the Royal Rumble in an attempt to earn a title shot at WrestleMania, but was eliminated by Sheamus. After the Rumble, Jericho would hit the Codebreaker on CM Punk Jericho explained that he attacked CM Punk because everyone (including Punk) was trying to "mimic" Jericho. Jericho would refer to the rest of the Elimination Chamber competitors as "wannabes". He then participated in an Elimination Chamber match for the WWE title, but was removed from the match without actually being eliminated due to an injury at the hands of the current champion CM Punk. He then challenged Punk for the WWE title at WrestleMania 28 and Extreme Rules, but was unsuccessful both times.

He then challenged the World Heavyweight Champion Sheamus along with Alberto Del Rio and Randy Orton in a four man match, but lost due to Sheamus pinning him. He then entered the Raw Money in the Bank Ladder Match in the hopes of earning a world title opportunity, but the match was won by John Cena. He then turned face and feuded with the SmackDown! Money in the Bank winner, Dolph Ziggler, who he defeated at SummerSlam. The next night on Raw, Ziggler defeated him in a match that had Jericho's career on the line, and thus he left the WWE for a third time.

On January 27, 2013, Jericho made his third return to the company as a face by entering the Royal Rumble match at number two, opposite of Dolph Ziggler. Though he would lose, he would compete in the Elimination Chamber match on February 17 to determine the Number One Contender for the World Heavyweight Championship. He was eliminated by Randy Orton. In the following weeks he began a feud with a new wrestler named Fandango. The two would have their fist match together at WrestleMania 29, with Fandango picking up the victory.

in 2016, Jericho was confused about all the hype involving AJ Styles and showed a lot of jealousy towards him. in the January 25, 2016 editon of Raw after Styles won a match against Jericho, Jericho started to act a bit dodgy towards Styles. Since that match, Jericho had been obsessed with AJ Styles. Jericho then evened the odds and beat Styles in the February 12th edition of SmackDown. Then they had an amazing match at Fastlane which was won by Styles.

In the February 22, 2016 edition of Raw, Jericho admits that Styles is phenomenal and teams up with him to form "Y2AJ". In their first match as a team, they beat the Social Outcasts. later on that week, they teamed up with Mark Henry to beat The New Day in a 6 man tag team match. in March 7, 2016 after losing a tag team match against The New Day, Chris Jericho hit the codebreaker on AJ Styles and shoved a Y2AJ shirt on AJ Styles' mouth, thus turning heel once again. a few days later at Smackdown, Jericho explained himself and claimed that the fans betrayed him and gave AJ Styles all the attention. Jericho then lit a Y2AJ shirt on fire and put it in a trash can. Jericho basically turned himself into a comedic version of his 2008 heel self. instead of calling people "hypocrites" and "parasites", he referred to people as "stupid idiots". In the March 14th edition of Raw after a match with Neville, Jericho lashed out on the fans and claimed that this was all their fault. during that time, AJ Styles arrived and got his payback by attacking Jericho with one of his finishers, The Phenomenal Forearm. The next two weeks on Raw, Styles would challenge Jericho to a match at WrestleMania. Jericho would refuse until Styles would really get under his skin. at Wrestlemania, Jericho won the match by hitting a mid air Codebreaker on Styles.

In the 8th of August 2016, Chris Jericho formed an alliance with Kevin Owens in order to fend off the team of Enzo & Cass. two weeks after their match with Enzo & Cass at SummerSlam (which they won), Owens would win the WWE Universal Championship in a fatal 4 way match which also involved Roman Reigns, Seth Rollins & Big Cass. Jericho & Owens would continue their alliance until later on in 2016 when they split up after Jericho felt he was being disrespected. the two would reunited in Roadblock: End of the Line after Jericho helped Owens retain his title against Roman Reigns. They would then split up in the Feb 13th 2017 edition of Raw after Owens supposedly gave Jericho a new list which turned out to be Owens' list. After Jericho pointed out that his name was on the list, Owens brutally assaulted Jericho and kept him out of action for two weeks. Jericho would return in the 2017 Fastlane event to distract Owens which lead to Goldberg winning the Universal Title (thus turning face in the process)

On November 5, 2017, Jericho had returned to NJPW in a pre-taped vignette, Offering Kenny Omega a challenge to a match at Wrestle Kingdom 12 in Tokyo Dome. His challenge was quickly accepted by Omega and thus made official by NJPW the following day as a title defense for Omega's IWGP United States Heavyweight Championship. The match, dubbed "Alpha vs. Omega", was Jericho's first match outside of WWE since 1999. Jericho returned in person at the December 11 World Tag League show, attacking Omega and making him bleed after his match, while also beating down a referee, a young lion and color commentator Don Callis, thus establishing himself as a heel.

The following day at the Wrestle Kingdom 12 in Tokyo Dome press conference, Jericho and Omega would get into another physical altercation. Because of the two incidents, NJPW turned the January 4 match into a no disqualification match. At the event, Jericho was defeated by Omega. It was soon revealed that the match was given a five-star rating from the Wrestling Observer Newsletter. The next night, at New Year Dash!! 2018, Jericho attacked Tetsuya Naito. 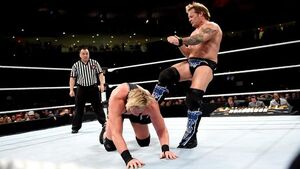 Jericho kicking Swagger in their match at the 2016 Roadblock event. 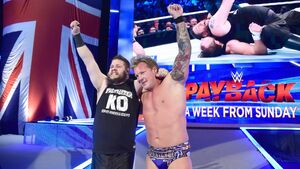 Jericho and Kevin Owens in April 2016. 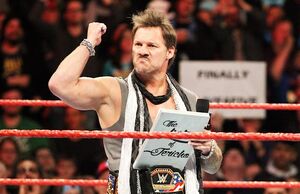 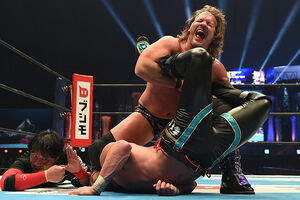 Jericho putting Omega in the Liontamer during their Alpha vs Omega match. 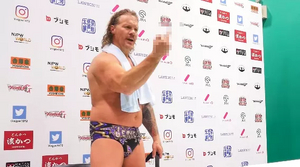 Jericho upset about his loss against Omega and lashing out on the interviewers.
Add a photo to this gallery

Retrieved from "https://villains.fandom.com/wiki/Chris_Jericho?oldid=3670622"
Community content is available under CC-BY-SA unless otherwise noted.