Kill Mike along with any other individuals connected to Gus' drug empire (failed).

Chris Mara is a recurring antagonist in Breaking Bad. He was one of Gus Fring's enforcers for his drug empire and answered to Mike Ehrmantraut.

He is a recurring background character in the fourth season and a minor antagonist in the fifth and final season of the series.

He was portrayed by Christopher King.

Chris is first seen running for cover after Gaff kills another member of the Pollos distribution network at a long range. Gus comes out and walks right at Gaff and for his huevos, giving Gaff no satisfaction. Gaff ends the attack and leaves.

Chris and Tyrus Kitt are ordered to kidnap Walter White and take him out to the desert where Gus fired him and made death threats against his family should he interfere with his plans to kill Hank.

Chris also assisted Gus to the hospital where he confronted Jesse and drove to the Casa Tranquila Retirement Home where he was preparing to execute Hector Salamanca, unknowingly walking into his own death.

After Gus' death, Chris is hired by one of Gus' suppliers Lydia Rodarte-Quayle to eliminate any loose ends that could tie to Gus' drug empire to herself. He captures Duane Chow and held him at gunpoint. When Chris tries to kill Mike for $30,000 his death, he shot Chow in the head earlier and is caught unaware by Mike and is shot by him. 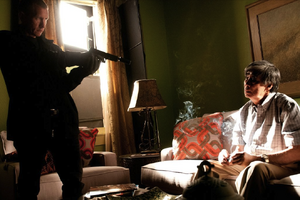 Chris pointing his gun at Chow. 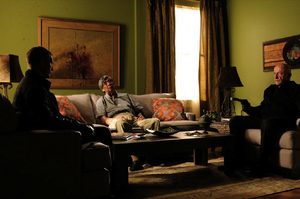 Mike pointing his gun at Chris, with a dead Chow lying on the couch.