The Host with the Most, McLean, Jerk (by Gwen), Pretty boy (by Chef Hatchet), Chris the Creep (by Beth), Chris McLame (by Jo), Crazy Man (by Shawn), Boss (by Chef)

Find Duncan after he quit TDWT (failed) and become the most popular reality show host (succeeded).

Chris McLean is the host and the main antagonist of the Total Drama series. He is the one in charge of designing the challenges the contestants have to face. In-universe, it is confirmed that Chris did not create Total Drama by himself, as he mentions producers multiple times in the series. His most important employee and personal pawn is Chef Hatchet, as well as several interns as well.

He is voiced by Christan Potenza.

He openly takes pleasure in watching the competitors suffer, and frequently goes out of his way to make things as difficult as possible for his own amusement.

In addition, it becomes increasingly clear that he has absolutely zero concern for fairness and sportsmanship in the competition, and loves to deliberately and abruptly eliminate contestants who don't deserve it in extremely unfair ways, and on more than one occasion he has out–and–outright broken the fundamental rules of the game. Chris thoroughly enjoys it whenever contestants fight with, bully, exploit, betray and cheat against each other, and sometimes tries to exacerbate the conflicts between them.

According to his voice actor, Christian Potenza, something happened in Chris' life that made him the sadistic host he is today. Unfortunately, the staff hasn't had any time to make a story for that yet. 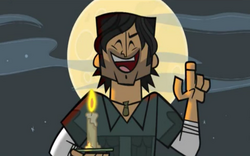 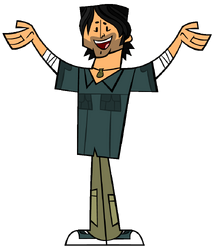 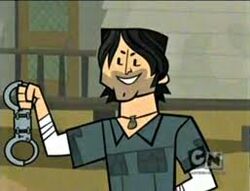 Chris appears in Skatoony in the episode Pop Video.
Add a photo to this gallery
Retrieved from "https://villains.fandom.com/wiki/Chris_McLean?oldid=1456092"
Community content is available under CC-BY-SA unless otherwise noted.